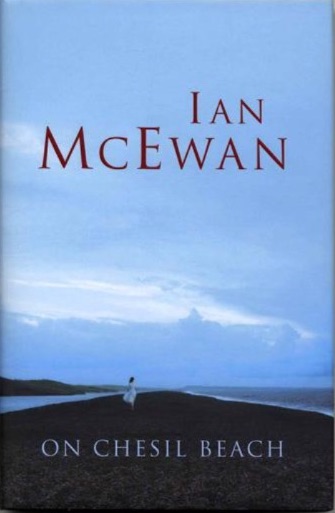 The last time I mentioned Ian McEwan’s novella, On Chesil Beach, was to give it and the novel that followed it, Saturday, an especial thrashing for marking the point at which McEwan’s novels became exasperating self-parodies, self-satisfied and upper-middle class (you can read that piece here).

And then over a couple of years I reread everything he has written and fell back in love with his work – albeit with some reservations.

I read On Chesil Beach again over the weekend and began to understand why my initial assessment was so wrong.

It is 1962. England is poised on the cusp of permissiveness but it hasn’t yet happened; socially, the climate is largely that of the 1950s – in fact, perhaps even of the 30s and 40s. Two educated but sexually inexperienced lovers, Edward Mayhew and Florence Ponting, both twenty-two, are sitting to their first dinner together as a married couple – they are in a Dorset hotel overlooking Chesil Beach. Edward is a history graduate; inspired by Norman Cohn’s work on millenarian and mystical cults of the middle ages he dreams of writing groundbreaking biographies of minor historical figures who once played a significant role but then disappeared from the world’s stage. Florence is a graduate of the Royal College of Music and a talented violinist, and dreams of a glittering career with the string quartet she has founded. The novel opens on their disastrous wedding night, the novel’s famous opening lines setting out everything we need to know regarding what is about to happen:

“They were young, educated, and both virgins on this, their wedding night, and they lived in a time when a conversation about sexual difficulties was plainly impossible.”

I don’t think On Chesil Beach is intended to be a comic novel but there is no denying the comic or satirical possibilities of its central wedding night scenario. In different hands it would have been cruelly funny – one imagines, say, an old Kingsley Amis novel, or one of Malcolm Bradbury’s sharp, cynical campus satires of the 60s or 70s.

But McEwan’s methods are utterly different. Everything that happens is treated with gravity and seriousness. And in some respects, this is both the book’s triumph and a potential weakness: it does sometimes seem as if McEwan is first and foremost preoccupied with working out a formal challenge he has set himself. Indeed, this is often the case with McEwan’s work: he is interested primarily in ideas and the social and moral consequences of ideas and actions, sometimes at the cost of emotional involvement – his latest, Machines Like Me, exemplifies this. I wouldn’t want to overstate this in the case of On Chesil Beach, however. One is always aware of the book’s underpinning concerns with class and social attitudes but this is never at the expense of emotional engagement with its characters.

In five taut and beautifully written ‘movements’ – it is hard not to reach for musical analogies given the prominence that classical music has in this novel – McEwan situates Edward and Florence in an England that is tangibly real, in lives that have tremendous texture and social detail. Education, wealth, class and upbringing and the roles these play in forming identity and sense of self are used with immense economy and sureness of touch. The lovers’ backgrounds; their first meeting in Oxford at a CND event. Edward’s somewhat chaotic home on the edge of the Chilterns; Florence’s somewhat bohemian Victorian villa in North Oxford, her philosophy don mother, her (implicitly rather philistine) successful businessman father.

The novel also has a distinctly elegiac tone and sometimes reads like a loving farewell to a far more rural England – before motorways, shopping centres and supermarkets.

In short, McEwan makes us believe not just in his two lovers, but in the England that has produced them. But more importantly, he also makes us care about them and about what will happen to them as the consequences of this one night in July 1962 move like ripples on a pond across the decades.

If I do have any quibbles, it is these. The subtle class differences between Edward and Florence sometimes feel a little too conveniently diagrammatic. And what McEwan considers normal for his characters and normal for the kind of middle class life he most frequently depicts sometimes strikes me as far from ordinary. For example, part of the young couple’s wedding settlement is a gift of £2,000 from Florence’s father – mentioned only really in passing but a sum that would be equivalent today to a gift of well over £40,000 – along with a job in his successful electrical equipment business for Edward. That – and one or two other passages, in fact – seem to belong more readily to Victorian fiction. But these tensions – the archaic, anachronistic tone here and there, the class differences between the couple’s families, so specific you could almost plot them on a graph – are almost certainly deliberate: everything in an Ian McEwan novel tends to be deliberate.

But these complaints pale into insignificance when set beside the overall achievement of the book. On Chesil Beach is not without faults but it is also utterly  engaging and is one of McEwan’s most beautiful and beautifully written novels. It can easily be read over a long, summer weekend and of course is ideally suited to this. But with its elegiac tone and very English melancholy it would also make a lovely read over a few autumn evenings. Anyway, suffice it to say that rereading it has made me completely change my mind about the book. I love it.