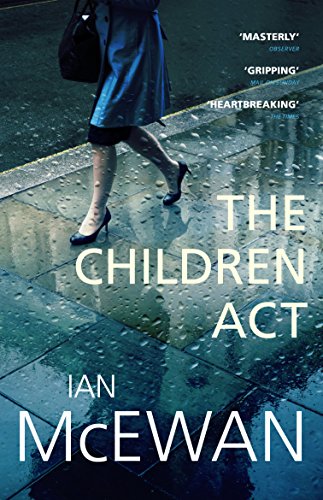 [When this website launched at the very end of July 2015, the first book review we put on the site was one written about Ian McEwan's The Children Act. The reviewer was not terribly impressed by the book and gave it a fairly muted reception. The editors of the site had always hoped that maybe the reviews carried on these pages would prompt other people not just to read the books but maybe to also respond to them with their own perceptions - and this is what has happened here. Alun Severn, who has provided the site with plenty of excellent reviews of his other reading, has found himself disagreeing with the orginal review and has written one of his own - and we are delighted to print it here. Links are provided to the other articles where referred to in the text.

Back in September 2016 I wrote a piece (here) about the experience of rereading Ian McEwan’s novels. It was a sort of confession – about falling out of love with McEwan’s work (and the reasons why) and unexpectedly falling back in love.

I concluded that piece by saying that for all the sometimes glaring faults his novels have – implausibility, a tendency for grand guignol, their determined upper-middle classness – I felt compelled to keep reading. And I did, moving on to Enduring Love, Sweet Tooth and now The Children Act, the last of which has already appeared on Letterpress (here), where it was felt that McEwan’s interest in the technical aspects of family law rather overwhelmed a “flimsy central storyline”.

Partly on the basis of that review I approached the novel with fairly low expectations – but I finished it feeling very differently indeed and now think it may be McEwan’s most perfectly realised work.

Fiona Maye, the judge, is superbly characterised, and the cloistered, privileged ambience of Gray’s Inn Square is astonishingly visual and real, its lofty ceilinged flats home to hundreds of ‘benchers’. McEwan’s fascination with the language, nuance and ethical complexity of legal judgements offers a further linguistic and emotional layer to the book. This is not to say there aren’t some weaknesses. The philandering husband, Jack, for instance, never emerges as more than a slightly ridiculous cypher, and Adam, the young Jehovah’s Witness who is refusing the blood products that may save him from leukemia, could be more fully drawn.

But what marks this particular novel out, I think, is that within the constraints and methods McEwan adopts, he achieves on this occasion an almost perfect integration. The law, and especially family law, doesn’t just offer the background, the mise en scène, for this story. It informs every aspect, every nuance, and out of these somewhat unpromising materials a world is built.

With incidental touches – grace notes, ornamentation, rhythm, pace – McEwan gradually builds up not just Fiona Maye’s character, but also how she lives, how she thinks, and why she thinks as she does. She is the novel’s centrepiece. And the language of music – and specifically of piano playing – is important here. Maye is a keen amateur player, and McEwan always writes superbly and with great insight about music.

For example, there is a marvellous scene where Maye’s husband is listening to Facing You, Keith Jarrett’s first solo piano record, and she reflects that what marks Jarrett out is his ability to master the rigid conventions of the classical repertoire, but then leave these behind, opting instead for the high-wire spontaneity of improvisation. That she should also have treated her husband to a surprise trip to Rome to see Jarrett in concert – one of the pianist’s gargantuan solo performances, typically in the world’s grandest venues, where rather dourly and forbiddingly he strives for transcendence of a kind – seemed utterly in character: an extravagance on a number of different levels.

She, meanwhile, turns again and again for solace to a Bach partita she once memorised as a birthday performance for her husband (again, weirdly in character). Her desire to master the baroque complexities of this piece and bring its fleet, dancing measures to life seems closely allied to her mastery (her performance?) of the law. Improvisation vs preparedness. Spontaneity vs control. Rigidity vs emotion. The points are not laboured, but they are there, and resonate deeply. (And while on the subject, I rather admire the way that McEwan expects his readers to draw these parallels between Bach and Jarrett. The novel has cultural hinterland, but you are expected to help populate it.)

One of the contradictions the novel explores – and which its central character must face up to (another echo of Jarrett’s Facing You?) – is that of Maye’s chosen profession of family law and her own childlessness. But important as this is, it isn’t really what the book is about. Its real subject is the mystery of human love and its frailties and responsibilities, and this is present on every page, hanging in the air like the decaying after-sound of piano notes.

I found this novel emotionally and intellectually gripping. It is a kind of distillation of McEwan. All of his preoccupations are there, his signature themes, the familiar methods – but this time coupled with a restraint and exquisite control that he doesn’t always exercise or achieve. It is the novel I will return to whenever I need to remind myself of McEwan’s capabilities.