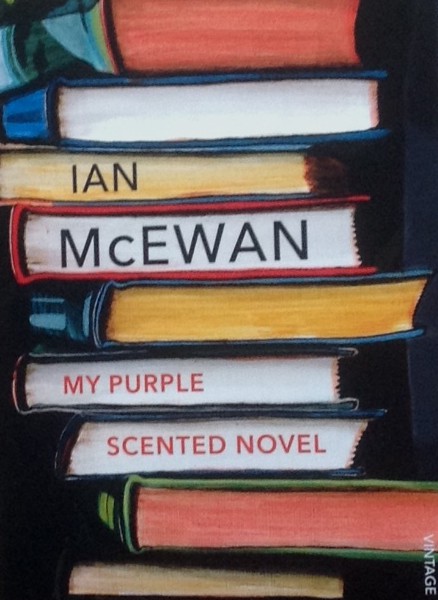 Ian McEwan's sort story, My Purple Scented Novel, was originally published in The New Yorker in 2016 and has now been reprinted in a charming and arresting small format paperback by Vintage to celebrate the authors 70th birthday. It’s another one of those impulse-buy productions designed to be kept by the cash till and the publishers have done a splendid job in producing an artefact that makes you want to pick it up and take it away (after paying for it, of course).

McEwan’s story is a wicked, tongue-in-cheek fable that plays with common notions of decency and morality and is set in the literary world McEwan knows all about. He has plenty of fun slipping in references to Martin Amis and himself  - but those are clearly there as a tease or little in-joke and there’s no suggestion that the story he presents us with here has any foundation in a real relationship.

The tale – or should I say confession - is narrated by Parker Sparrow, who tells us from the very beginning that he ‘stole a life, and I don’t intend to give it back.’ The life, and reputation, he has stolen is that of his closest friend, Jocelyn Tarbet, once feted as a potentially great novelist until Sparrow’s intervention.

I do have to be careful not to provide you with too much detail here because it is only a short story and almost everything might be considered a spoiler but I can tell you that both Sparrow and Tarbet desperately wanted to be famous novelists and only one looks likely to get the level of critical regard they both longed for. Although Sparrow’s life goes towards domestic obscurity, Tarbet becomes a celebrity and despite hidden jealousy on Sparrows part, the two remain good friends despite the fact that their paths cross less frequently.

Then one day, entirely accidentally, Sparrow gets the chance to hatch an extraordinarily cunning and devious plan to steal one of Tarbet’s manuscripts and pass it off as his own – a book that’s eventually printed on the scented paper referred to in the title. But that’s not all – he also works out how he can use the situation to not only successful steal another author’s material but to ruin Tarbet’s reputation and replace him in the affections of the literary community.

I really mustn’t say more because you will want to find out for yourself how he works the scam – and remarkably ingenious it is too.

McEwan is having lots of fun at the expense of the literary world and the way it creates and destroys the reputation of writers. Although the story is short (35 pages or so) and shot through with sly humour, it’s not an insubstantial read. This is prose by a master craftsman – it pulls off that extraordinarily difficult trick of looking as if it was easy to write. It flows like honey and before you know where you are you are pulled inside Sparrow’s world and you forget the tricks the author has pulled off that would seem hugely unlikely if you detached yourself and took a big step back to look at it through a different lens.

But I don’t think it will even occur to you to ask whether the Machiavellian plot is really credible or not – the story has a splendid logic all of its own and I loved passing an hour or so with it.