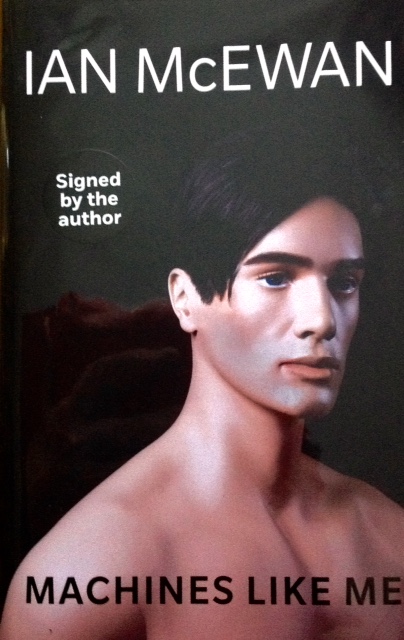 Machines Like Me is Ian McEwan’s Artificial Intelligence novel. To describe it thus is factually accurate but inadequate, for it is also much more than this. A talent such as McEwan’s comes along once in a generation (as one recent reviewer has pointed out) and his ability to mine contemporary trends and social mores for the raw stuff from which gripping moral fiction can be created is unparalleled.

And so it was perhaps predictable that at some point McEwan would tackle the question of AI. What was less predictable was that he would choose to do this in the context of a counterfactual ‘alternative history’ novel which opens in 1982. To do this he brings forward by fifty-odd years the recent history and the near future of mass computing, the internet, autonomous vehicles, artificial intelligence and the digital revolution to create a world that is both disturbingly familiar and vertiginously strange.

The novel opens with Charlie Friend, a slacker dedicated to avoiding full-time employment, deciding to blow an inheritance on the purchase of one of the first of a batch of twenty-five fully-developed ‘androids’ or ‘replicates’ – a ‘conscious’ machine. There were thirteen Adams and twelve Eves in the batch – Charlie was too late to get one of the Eves, they were snapped up – and so his Adam becomes the third member of a strange ménage-a-trois: Charlie, Miranda, an upstairs student flat-mate but soon-to-become girlfriend, and Adam.

What, you ask yourselves, could possibly go wrong? The answer, of course, is just about everything.

Let me also say – without spoiling anything of the plot of the novel – that as it opens, Mrs Thatcher is dispatching a task force to reclaim the Falklands Islands from the military dictator, General Galtieri, Britain is divided regarding the prospect of a re-enactment of fading imperial glory over 4,000 miles away in the South Atlantic, and an alliance of socialist, far-left and revolutionary groups has propelled Tony Benn to the leadership of the Labour Party. The Falklands War, however, will have a catastrophically different outcome.

The immense care and the imaginative resources expended in constructing this counterfactual 1980s Britain are slightly puzzling, however, because while important, it isn’t by any means true to say that everything in the novel then follows from this historical inversion. The 1980s setting certainly isn’t incidental but nor does it seem to be essential. It offers a hook for exploring how history is made and what becomes history but again these are by no means the most important themes in the book; that title would probably have to be awarded to computing, consciousness, chance, truth, personal morality, and justice and culpability.

The point I am trying to make is that as far as I could see it would have been perfectly possible to play out these complex and demanding themes without the additional effort of placing them in an invented counterfactual 1980s in which the persecuted genius of Bletchley and the Enigma code-breakers, Alan Turing, is not only alive but well, immensely wealthy, and living in somewhat bohemian grandeur with his gay lover. Wired magazine, however, speculates that reinventing the past was probably easier for McEwan than inventing the future (he has, by his own admission, no interest in speculative ‘sci-fi’ writing) and that having Turing alive, ageing but intellectually undiminished, still capable of leading new advances in theoretical computing, was central to this. This is certainly a plausible interpretation.

Anyway, anyone who enjoys McEwan writing at the height of his very considerable powers will like this novel. The assurance with which he handles his chosen material, his ability to bring together complex ideas and make them deeply human and morally arresting is nothing short of extraordinary. In this piece I called him “a great prose stylist” and said that “his prose is studded with darkly glittering insights that will make you wince with their accuracy”; I said that he has “ruthless control and surgical sureness of touch”. Nothing in this latest novel would make me change those judgements. It is an astonishing performance.

But somehow, performance does seem the appropriate word. This reads like a novel in which McEwan is showing us what audacities he is capable of.

One of McEwan’s great strengths, it has always seemed to me, is that of engaging us emotionally, even when – perhaps especially when – we might wish to resist it. While I found much to think about and a huge amount to enjoy in Machines Like Me, I found relatively little emotional engagement. I read it not quite in a single sitting but certainly in three or four, but at no point did I find myself reading because I desperately wanted to know what happens to the characters. In fact, I never really quite believed in the characters. Almost certainly intentionally (it would appeal to McEwan’s sense of the paradoxical), Adam the android is by far the most convincing character; Charlie and Miranda, their peripherally involved parents, and two other centrally important characters (about whom I’ll keep quiet to avoid spoilers) are perhaps some of the weakest and most cipher-like characters McEwan has ever invented.

Machines Like Me is certainly an audacious novel but I don’t think it is McEwan’s most involving. I rather think it will make a terrific film and that that may well be the point.