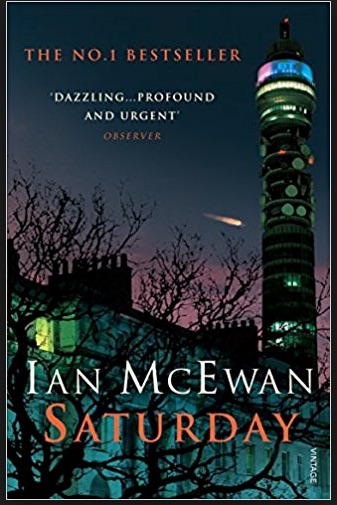 When I last wrote about Ian McEwan’s novel Saturday, I slammed it. I took it as emblematic of everything that was wrong with McEwan’s style. I said that his novels had become stagey and overblown and resolutely upper-middle class; that working class characters appeared if at all only as a form of lumpen, menacing threat; that the world he depicted seemed increasingly old-fashioned and anachronistic – and that Saturday managed to combine all these faults and was preposterous. I should also say that these remarks were made in a piece in which I admitted falling back in love with his novels. In a late display of fairness, I spent the weekend rereading Saturday to see whether there was any reason to change my mind.

Let’s just refresh ourselves regarding the context of this novel. Published in 2005, Saturday – like Mrs Dalloway and Ulysses – is set during a single day, the action taking place on the 15th February 2003, the day of the protest against the Bush-Blair invasion of Iraq, the largest anti-war demonstration London has ever seen. The ‘dodgy dossier’, regime change under the pretext of weapons of mass destruction, the gathering momentum as the US and its allies prepared for war – the unfolding of these defining public events are seen through the eyes of Henry Perowne, a neurosurgeon in his late-40s.

Reading it at the time of publication, I thought that in yoking his frequently rehearsed concerns – the thin veneer of civilisation, the intrusion of unreasoning violence, the precarious safety of those we love – to contemporary events, McEwan had over-reached himself. But time has reduced the novel’s documentary content to the condition of recent history and the personal and the public now sit together convincingly. On rereading I found Saturday absolutely gripping.

There is something astonishingly satisfying about its detail, its texture of lived experience, its depiction of the capital, the way it effortlessly immerses us in the life of one of McEwan’s most compelling and believable creations, Henry Perowne. There is something about the mixing of speech and inner dialogue, stream of consciousness and worldly reflection that puts me in mind of Saul Bellow. The ability that Bellow had to weave together contrapuntal themes, often employing crackling, electrifying language combined with an extraordinary compression of ideas, is precisely what characterises Saturday. It is surely no coincidence that McEwan prefaces his novel with a lengthy quotation from Bellow’s Herzog.

And yet there is a problem. While Saturday is McEwan’s most grandly Bellovian book, it is also his most Murdochian. For the other presiding shade is that of Iris Murdoch at her campest and most theatrical, that slightly mad, over-the-top late Murdoch style that seemed to have been found at the bottom of a huge dressing-up chest in a sprawling country house called High Literary Manor. This, I’m afraid, remains a major flaw at the heart of the book.

Perowne and his media lawyer wife and his two marvellously accomplished grown-up children live in some grandeur on the north side of Fitzroy Square. I imagine that the vast, seven thousand square-foot, five-story townhouse that McEwan describes with such intimacy bears more than a passing resemblance to the Fitzroy Square mansion he himself once lived in. (It inhabits Saturday like another larger-than-life character.) But the powerful, accomplished neurosurgeon Perowne has come into his Fitzroy Square mansion not through his own good fortune nor even as reward for his own demanding labour: it is in fact the inherited property of his wife, Rosalind, whose mother was killed in a car crash and whose father, John Grammaticus, a flamboyant drunken poet in recent years unhinged by grief, now lives in splendid solitude in his chateau in the Pyrenees.

One feels that in a writer of McEwan’s accomplishments these camp and stagey conceits cannot be accidental. Every detail will have been minutely considered and will somehow be central to his purpose. Reading it at the time of publication, however, as the war in Iraq was achieving levels of astonishing brutality and cruelty, this theatricality seemed at best misplaced and at worst perhaps even irresponsible. I think that is what I thought, anyway.

But on rereading, these concerns seem less important. McEwan’s powers of invention in Saturday are extraordinary, as is his ability to immerse us in his imagined world, qualities as evident in this novel as they are in any other he has written. That he also manages such density and texture of imagination while writing prose of great lightness, elegance and simplicity is nothing short of miraculous.

Perhaps time has been kind to Saturday; or perhaps it has merely given me the opportunity to become more charitable in my judgements. Whatever the case, seen now in the wider context of McEwan’s overall body of work, it seems clear that while it may not be the masterpiece it could have been, nor is it the fatally, egregiously flawed work it appeared to be a dozen or so years ago when judged in the white heat of the early years of the Iraq war. To read it then seemed sufficient reason to ‘break’ with McEwan – and absurd as it may sound, I did, and for the best part of a decade.

In my own judgement if no one else’s, I now think that Saturday was a casualty of the Iraq war. Now, however, while I can see its faults I can also see the brave scale of its ambition and I know it’s a novel I’ll return to yet again in the future.

Other pieces about Ian McEwan: