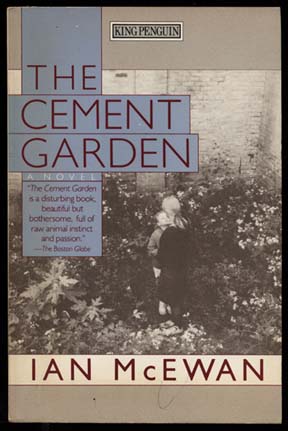 The Cement Garden by Ian McEwan

Back in 1978 the young Ian McEwan had a couple of slim volumes of short stories to his name and a growing reputation that he might just be an author who would go on to do something a bit special. On the strength of that an American publishing house started pestering him for a novel – did he, they wondered, have something up his sleeve that they could publish?

Untitled at that point, The Cement Garden, is what he sent them and what became his first novel. It’s a short novel too – barely more than a novella – and bears all the hallmarks of a short story idea that’s been expanded and coaxed into longer form.

But neither of those two latter points are a criticism of the book which is, in lots of ways, a startling debut. There are probably several reasons why it’s become something of a cult book – the gothic atmosphere, the oppressive subject matter, the incest and a body encased in concrete in a trunk all give it high marks on the ‘something a bit different’ scale of measurement. But for me what marks this book out as a bit special is the writing – atmospheric and absurdly confident and skilful for a first novelist.

Primarily seen through the eyes of the 15 year old Jack, this is the story of a family that has collapsed in on itself. Jack has an older sister, Julie, and a younger one, Sue who when we meet them are already engaged in sexualised play rituals that don’t involve the very much younger brother, Tom, who is just a toddler. The children’s father is a rather crabbed man with a weak heart whose ambition in life seems to be to surround their house with concrete paths. When the father drops dead the children are left with their mother who also quickly succumbs to illness and, over a quite extended period becomes increasingly bedridden and dies herself.

The children take the seemingly strange decision to tell no-one about this and to put the body of their dead mother in a trunk in the cellar and encase her in concrete using the sand and cement left over from their father’s garden plan.

What we then see is the way the dynamics between the children play out against a constant backdrop of barely conscious, simmering sexual tension. Jack goes through periods of self-hate and self-neglect while his more fastidious sisters watch him with a mix of fascination and distaste. Young Tom, meanwhile goes feral in a sort of storybook, non-threatening way.

The world they have created in this house they’ve assumed control over is, however, blown open by Julie’s new boyfriend, a professional snooker player called Derek. At this point the plot and the dialogue start to resemble something from the pen of Harold Pinter as the boyfriend starts to discover what the odd smell is that is coming from the cellar.

The novel ends with the three children reminiscing about their parents as the blue lights of police cars arrive at the address.

Inevitably I suppose the contents of the book have spawned a series of conflicting interpretations of what McEwan was trying to do. McEwan himself has suggested that he was trying to write something that spoke to the spirit of the late 70s and the feeling that everything was collapsing around our ears – socially and financially. The word most often used about the book is ‘dark’ but I rather like McEwan’s own response to that description:

"I don't know about words like dark. I thought it was funny, too: having a secret like your mum encased in cement in the basement."

He’s right, you know, it is funny.