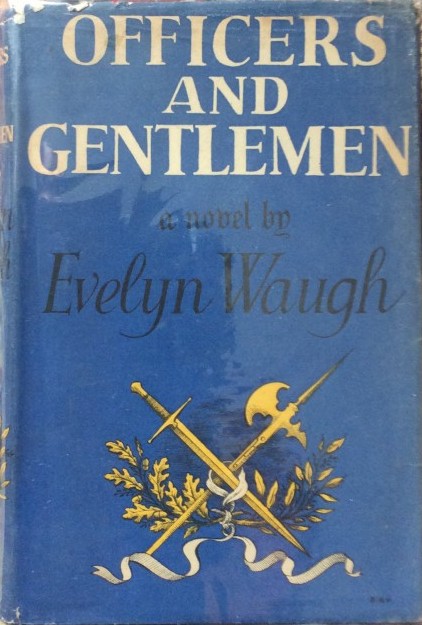 Officers and Gentlemen by Evelyn Waugh

In Officers and Gentlemen, the second volume of Waugh’s Sword of Honour trilogy, we rejoin Guy Crouchback in black-out London following his ignominious discharge from the Halberdiers. In many respects he was a scapegoat: the real offender was the virtually indestructible and incurably belligerent old soldier Brigadier Ben Ritchie-Hook and his maverick ‘operation’ on the Dakar coast.

The opening section, a return to Bellamy’s club, full of real and armchair-soldiers and enlivened by the exploits of a drunken servant, Job, offers a welcome familiarity. But the book really picks up pace when Guy is called to a mysterious meeting at the headquarters of Hazardous Offensive Operations. HOO, Waugh notes, was a “bizarre product of total war” and was “engrossing the simple high staff officers of all the Services with experts, charlatans, plain lunatics and every unemployed member of the British Communist Party”. At this stage of the conflict HOO occupied several mansion flats in a “supposedly luxurious modern block”, but would later “proliferate through five acres of valuable London property”. Waugh’s incidental descriptive writing is one of the joys of this trilogy, evoking the texture of war-time life richly in scene after scene.

At HOO HQ he is interviewed by a Major of about his own age who asks him what he knows about commandos. “Not much,” Guy carefully answers. The Major explains that that is good, because they’re top secret. Guy finds himself despatched to the Scottish island of Mugg where these hush-hush, new-style ‘commando units’ are being trained.

On Mugg it is deep winter and the inhospitable and mountainous terrain is treacherously icy; casualties from accidents during climbing training are high. He reports to a deserted hotel, a draughty baronial pile where he meets Ivor Claire, a Captain of Blues and a show-jumper of some repute. Claire recently fell fifty feet during training and is still recovering. He is reclining on a sofa, his head bandaged in a turban of lint, a glass of white liqueur to hand. He is wearing narrow velvet slippers embroidered with his monogram in gold thread and nursing a pekinese dog. “The pictorial effect was of a young prince of the Near East in his grand divan in the early years of the century.”

Even before his training is fully completed Guy finds that the operation he and the other commandos are training for is a blind and that new orders have been issued: they are to embark on troop ships bound for Cairo, where as special commandos they will help resist Rommel’s advance in North Africa.

And it is here – roughly the middle of the book – that the problems I thought I recalled from previous readings are to some extent confirmed. By comparison with the earlier sections, the novel now seems to become a little congested. Barely established in Egypt, Guy and the other commando units are re-embarked for Crete, where the allied defence is crumbling under relentless German bombing and strafing, preparing the way for Hitler’s airborne invasion. Allied troops are preparing to evacuate the island amid scenes of dreadful chaos and desperation. Incident seems to crowd on incident and the cast of characters isn’t always clear (at least it isn’t to me).

But these occasional confusions regarding characters may be intentional. One of the things I don’t think I had previously understood is that Waugh is obsessed with characters whose identities are unstable (in all senses) – especially those who exist fluidly in the culture of the military, reinventing themselves as circumstances demand and opportunities enable. He is also interested in the ways that military propaganda, PR and ‘spin’ encourage this – turning disasters of military planning into daring, high-risk triumphs and creating expedient but temporary heroes out of failures. (He did, after all, have numerous opportunities to observe this at first-hand.) Somewhere I have seen Waugh described as “an anthropologist of military culture” and nowhere in his work is this more the case than in the Sword of Honour books.

The disastrous fall of Crete to the Nazis and the chaotic allied evacuation dominate the final pages of the book. Guy survives, but only just and spends weeks mutely recuperating in the Middle East. On leaving hospital he is cared for (after her eccentric fashion) by his old friend Julia Stitch, the ferociously upper class wife of Algernon Stitch (recurring characters in Waugh’s work, they appear prominently in Scoop, which is reviewed here). The book closes with Guy readmitted to the Halberdiers but chastened and disillusioned by what he learns of Ivor Claire’s scandalous desertion in the final hours on Crete. He remembers Claire’s ineffable grace on horseback and recalls again a triumphant ride he once witnessed the man make at an equestrian event in Rome.

I have learnt that the secret in reading the Sword of Honour books is to take them slowly. Waugh’s acid wit and dark humour may mislead us into thinking that his novels are ‘light reading’, but they aren’t – certainly not the later ones, anyway. His superb prose and the rich incidental detail he employs need careful reading. In reading this second volume I took my own advice and slowed down and paid close attention, relishing the detail and if in doubt, reading passages again. It paid off: I have rarely enjoyed Waugh so much nor derived such satisfaction from his deceptively demanding fiction.

Men at Arms – Vol I of the Sword of Honour trilogy