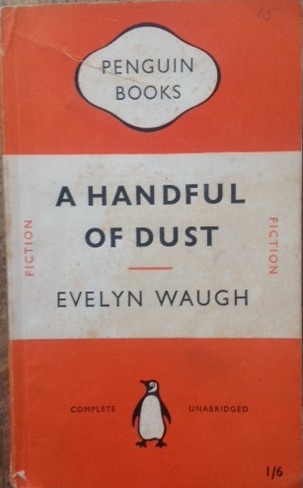 In an exchange of emails with one of Letterpress’ regular guest book reviewers after he had submitted his insightful piece on Evelyn Waugh’s Brideshead Revisited, I rather blithely asserted that in my view Brideshead was not Waugh’s masterpiece and that that accolade should go to his 1934 novel, A Handful of Dust.

Back in the late 1970s when I was a new teacher of English in a Sandwell secondary school, A Handful of Dust was one of the books on the ‘A’ level English curriculum and, even then as I was coaxing them through it, I was puzzled about what a small group of, albeit pretty bright, 16 and 17 year olds were making of Waugh’s world. I didn’t stay in teaching long enough to really find out but teaching the book did at least give me the chance to get to know it pretty well.

But following my recent email claims about how this was Waugh’s crowning glory, it occurred to me that it must have been something like four decades since I last read the book and maybe, just maybe, my belief in it might be a bit displaced? So when I scooped up the first edition Penguin copy in its rather understated orange and white livery it seemed to be an opportune moment to go back and confirm whether this was as substantial a read as I had remembered.

This rather rambling introduction sounds like I’m setting up to say that I need to revise my opinion or downgrade my opinion of the book. Well, that’s not the case at all – in fact quite the opposite. I’m glad to say at the very outset of this review that I finished the book entirely confirmed in my initial opinion.

This is Waugh at his most penetratingly critical, wryly satirical and, as always, exquisitely cynical. His target is the rising, newly acquisitive would-be upper middle-class who are busily engaged in nudging aside the older, landed upper class families who have grown lumpen and bogged down in lethargic tradition. No-one can undertake a more savage dissection of this process than an insider – and no-one is more unforgiving of their foibles and unbecoming characteristics than Waugh, who is after all, the ultimate upper middle class insider.

At the centre of the book is the representative of ‘old money’, Tony Last, who, with his wife Brenda and their young child, are the ‘perfect’ family. The London set talk about them with a sort of awed reverence and a reluctant acknowledgement of their happiness and their duty to their class heritage. But beneath the surface, all is not well. While Tony is happy to live on the country estate, do his duty and raise his child as part of the next generation of landowners, Brenda is drawn fatally to fashionable society and the shallow gossip and fads that do the rounds in London life.

In an increasingly brazen fashion Brenda abandons her life with Tony to take up in London with a young man, John Beaver, who is busy doing anything he can to climb the greasy social pole. The crisis moment comes with the death of their son, John Andrew, who falls from his horse in a hunting accident. When Brenda hears of the accident she at first thinks her lover has been killed, and appears relieved that her son is the victim. The chilling brutality of this moment is an extraordinarily powerful one.

Tony, decent but a bit dim, has taken a long time to understand what is going on with Brenda and is eventually forced to seek divorce proceedings when Brenda and her new beau conspire to try and take everything from him – including the family house – in the divorce settlement. Finally, Tony is forced finally to make a stand.

Understanding that the world he has been born into and has grown up in is likely to fall into the hands of this newly rising, shallow and amoral nouveau-riche, Tony decides he must seek an alternative, he must do something – for as Waugh himself puts it ‘the dappled unicorns had fled’.

On impulse he signs up to go on an expedition into the jungles of Brazil where he falls ill and is seemingly saved by an illiterate British Guianan, Mr Todd, who turns out to be his goaler rather than his saviour. Todd contrives to keep Tony from being discovered by a search party so that he can keep him there reading aloud the works of Todd’s favourite author, Dickens. Meanwhile back home the death of Tony Last is assumed and a memorial to his life is erected. Brenda remarries; not the reptilian Beaver but one of Tony’s former best friends.

It’s an extraordinary novel. It tells of the decay of a breed, a generation, a class and the rise of something more superficial, less rooted and ultimately without values. The fate of Tony Last, almost the last representative of his kind, is suitably ambiguous. As readers we are forced to confront the obvious question: is a life of semi-captivity perpetually having to read Dickens a worse or better fate than the life that awaited him back home where he would be a man out of time?

Copies of the book in paperback are easy to find and not expensive but if you want a first hardback edition, you'll need several thousand pounds of spare cash.