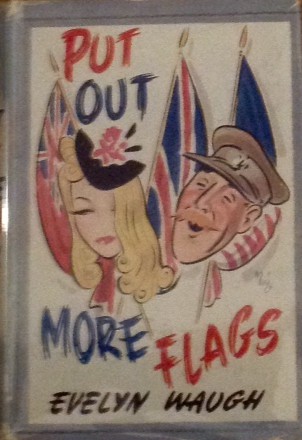 I have to put my cards on the table - I really disliked this book and didn't finish it. I've always had a slightly uncomfortable relationship with Waugh's writing because, socially and politically, I dislike just about everything Waugh stood for and believed in. However, I have to acknowledge too that he produced at least one really great novel - A Handful of Dust - and another which I think is very under-rated, Scoop. I think the power of these novels is the way they show a real mastery of satire  and he uses the form superbly - no-one is outside Waugh's scathing and scornful compass.

Put Out More Flags is an often overlooked part of the Waugh oeuvre and sits on the boundary line between his earlier satirical output and his later more serious, semi-autobiographical novels documenting the Second World War known as The Sword of Honour Trilogy. Waugh re-introduces us to Basil Seal, one of the central characters from his less than successful and often quite unpleasant Black Mischief, and sets the action in the first couple of years of the World War Two - a period often called the 'phoney war'. However, where Waugh's satire in a book like A Handful of Dust is razor sharpe, in this novel the scorn he pours on people seems simply crude and gratuitous and reading it just feels unpleasant. He ridicules the decadent and effete upper-classes who flirt with Hitler and with Fascism but to no real effect because he has no alternative. He dismisses anything of the Left - or the false Left as he sees it - attacking trendy writers and publishers who he sees as Communist fellow-travellers but he seems to have no idea at all how to deal with the working class who he also dismisses as supine and stupid.

By the time I was half-way through the book I was starting to wonder what on earth the point of continuing was and so I gave it up. It's not something I like doing but equally reading a book that leaves a sour taste in the mouth is also not my cup of tea. I'm sure that there are Waugh enthusiasts who really rate this book - I think I'll leave them to it.