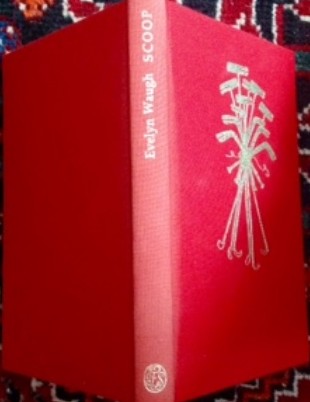 Literary critic, Robert McCrum included Waugh’s 1938 satire in his list of the 100 best novels and in so doing made this pretty unequivocal claim for it:

“Subtitled “a novel about journalists”, Scoop is the supreme novel of the 20th-century English newspaper world, fast, light, entertaining and lethal.”

But this is also Evelyn Waugh and alongside his excoriating satire of journalistic values and practices you also get a great chunk of gratuitous racism. Many of the critics I’ve read, and who place great value on the book, seem to side-step this particular elephant in the room and justify it by focussing on the dissection of the journalists’ ‘art’ and brushing off the racism as a side issue. I’ve even seen those who say that Waugh’s derogatory comments about race aren’t actually his but those of the journalists he is satirising. McCrum puts it this way:

“Scoop, as its title suggests, is a satire not on colonial sideshows, but on the eternal quest for breaking news, the endless competition between the Brute and the Beast.”

Hmmm…Well, no, I’m afraid I don’t see it that way at all. You will, I’m sure, find plenty here that doesn’t sit well with modern readers sensitized to casual racism.

Having said that, the fire he lights under dysfunctional, popular journalism is brilliantly handled. When the owner of The Beast newspaper, Lord Copper – probably a character based on Lord Beaverbrook – mistakenly sanctions the sending of the hapless William Boot to cover an entirely fictitious political coup and civil war in the East African country of Ishmaelia, he unwittingly starts a train of events that will result in the bumbling but decent Boot uncovering the truth behind all journalistic endeavour: that the story is the most important thing even if it is at the expense of truth and reality.

Boot finds himself an observer of the more experienced foreign correspondents and the fact that he’s effectively an innocent abroad acts to magnify the outrageous behaviour, back-biting and one-upmanship that they habitually indulge in. Alexander Nazaryan, writing for npr has this to say:

“Journalism does not acquit itself well once the clueless Boot reaches Ishmaelia, where the country is already rife with all manner of reporters: strong-jawed Americans, whiny French and cynical Brits. A more seasoned reporter who belongs in the last of these categories explains to the clueless Boot why they are all there: "News is what a chap who doesn't care much about anything wants to read. And it's only news until he's read it." With insight like that, who needs journalism school?”

Without unwinding the whole plotline for you, suffice it to say that Boot gets his scoop in the end and chooses to give up his chance of dubious stardom on Fleet Street in favour of a return to anonymity and a guaranteed modest income submitting a weekly nature column to the newspaper.

And so what can we take from Waugh’s unforgiving satire? I’m going to let Nazaryan have the final word on that because he captures it with some amplomb:

“As Waugh amply demonstrates in Scoop, journalism is a venal, duplicitous business, powered by ego and vanity.”

Copies of the book are, of course, easily available in Penguin paperback format but you’ll pay a bit more for a hardback. Should you feel moved to try and locate a first edition you’ll have to stump up and eye-watering £5,000 or more. I read the Folio Society version which has the added bonus of illustrations by the always wonderful Quentin Blake – again not necessarily the cheapest option you could buy but certainly a delightful one.