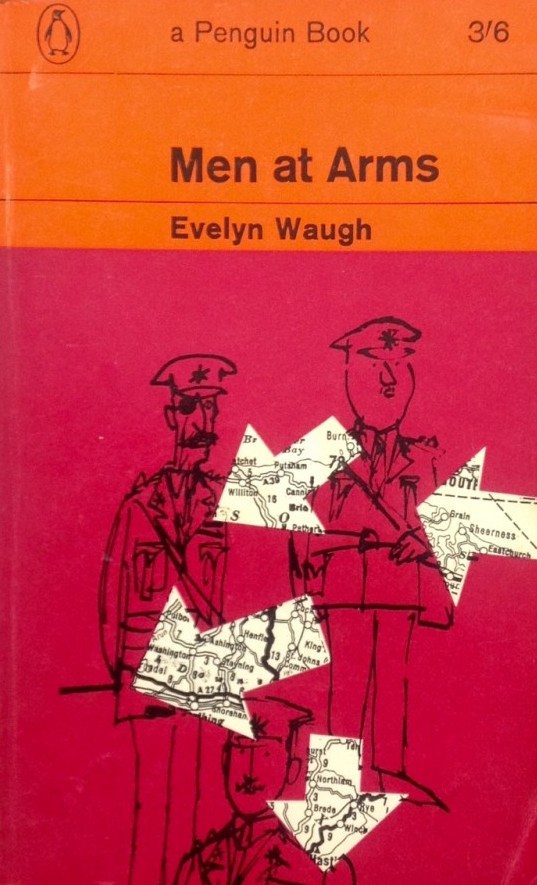 Men at Arms by Evelyn Waugh

Recently I was listening to a repeat of Desert Island Discs with Alexei Sayle and he chose Evelyn Waugh’s Sword of Honour trilogy as his desert island book. He rereads it every few years, he says, and considers it Waugh’s masterpiece. What a good idea, I thought. I reread Put Out More Flags in 2017 (it has two very different reviews on Letterpress – here and here) and Brideshead Revisited in early-2020 (reviewed here), but it has been some years since I read the three Sword of Honour books, Men at Arms, Officers and Gentlemen and Unconditional Surrender.

I’m fairly certain that when last I read Men at Arms I struggled to finish it, primarily because I found the endless military nomenclature and jargon – unavoidable one might argue in a book about the Second World War – confusing. But this time that hasn’t been an obstacle – and in any case I’m sure that any confusion or obfuscation is intentional – and I have found myself savouring the novel paragraph by paragraph, at times line by line, marvelling at its melancholy humour and unflagging inventiveness. The experience reinforces yet again the degree to which mood may determine one’s response to a book.

The central character in the trilogy is Guy Crouchback, an old-before-his-time thirty-something, son of a once powerful aristocratic catholic family, which is now decaying and fragmenting. The book opens on the eve of war, with Guy desperate to play his part – partly from patriotism, partly from moral conviction, partly from innate responsibility, and partly because of echoes of the colonial adventure yarns he read as a schoolboy. Certain phrases – ‘the officers who command you’, ‘the men you will lead’ – have an irresistible magic and nostalgia and conjure up memories of long evenings of escapist reading before a flickering study fire. After stumbling around unhappily trying to find a wartime niche for himself he is eventually inducted into a similarly decaying but once grand regiment, the Royal Halberdiers, and his military training begins.

Although this is Waugh’s Second World War trilogy it was not actually written during wartime. This first volume was published in 1952 and Waugh began to write the series from around 1947, drawing on both his own wartime experience and his diaries and journals of the period. This to my mind is the book’s great strength. For as he writes of 1939 and 1940, of war as amateurishness and farce, historical hindsight enables Waugh an occasional interjection to suppress the levity and darken the tone. For example, in the description of the Halberdiers’ first regimental dinner is this: “At length when the cloth was drawn for dessert, the brass departed and the strings came down from the minstrels’ gallery and stationed themselves in the window embrasure. Now there was silence over all the diners while the musicians softly bowed and plucked. It all seemed a long way from…those secret forests where the trains were, even then…rolling east and west with their doomed loads.” It adds emotional heft and throughout Waugh slyly punctuates the rhythms of the book in this way.

I was also struck this time by how close in this novel Waugh’s ruminative, melancholy tone is to that of his old friend Anthony Powell. This hadn’t occurred to me before. Nor had I bothered to work out that Powell’s A Question of Upbringing (the first volume of his Dance to the Music of Time sequence) was published just the year before Men at Arms.

The humour of Men at Arms resides in the fact that for Guy, all this strenuous military endeavour – the training, the drilling and discipline, the urgent orders and counter-orders, the enforced collectivism and loss of privacy – achieves little beyond a sort of reinvention of prep school life. Even military comradeship serves only to offer yet another version of school life, as Guy desperately tries to make friends while maintaining the aloofness and reserve he will need if he is to command a company. This search for friendship gives Men at Arms its three-part structure, each lengthy episode built around Guy’s evolving relationship with the insufferably conceited old colonial hand, Apthorpe.

Apthorpe is one of Waugh’s glorious creations and to a large extent is the emotional fulcrum of this novel. Guy regards him as a ‘character’, of course, and finds his endless idiosyncrasies and crackpot ideas both entertaining and a diversion from the grimness of life during wartime. But he also comes to have a genuine regard for the man, and when Apthorpe is away for whatever reason he misses him and looks forward to his return. It is very reminiscent of the kind of prep school friendship between outsiders that helps alleviate the horrors of boarding.

I haven’t even touched on the gloriously mad Brigadier Ben Ritchie-Hook, or Apthorpe’s illicit chemical toilet, or the unofficial landing at Dakar that Ritchie-Hook engineers. Men at Arms is rich in character and incident, arguably as are all of Waugh’s books, but I think what makes this one different is that Waugh adopts a more leisurely pace: the incident and humour are vital, but so too are the melancholy reflection, the masterful dialogue and the wonderful descriptive writing.

It truly is a book to linger over. As I near the final pages of this first volume I find myself thinking – and nowadays this is unusual – thank God there are two more to go.