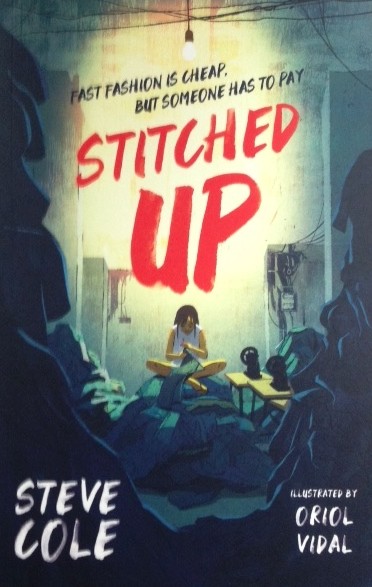 Stitched Up by Steve Cole

The combination of author Steve Cole and publisher, Barrington Stoke continue their partnership with this new blast against the horrors of child labour and global capitalism. Cole’s previous books have turned the spotlight on the exploitation of the poor in the so-called developing world ( you’ll find them reviewed here, here and here) and this one brings us face-to-face with the sobering reality of the burgeoning cheap clothing industry and the inhuman sweatshops that supply too much of our throw-away fashion. The real strength of this book – and it’s true of his previous ones too – is that they aren’t sterile propagandist lectures but humane, engaging and often exciting stories that are real page turners.

Twelve year-old Hanh lives a modest but safe and comfortable life in rural Vietnam but, like most children, she has big dreams. Hanh would love to work as a fashion designer but knows the chances of that are slim unless some kind of miracle happens. Then one day a glamorous man and woman show up offering to pay parents money if they let their children go with them to the capital city, Hanoi, to work as ‘apprentices’ in the clothing industry. At first Hanh’s parents are sceptical but they eventually agree and along with a busload of other youngsters she boards a bus for the big city.

But, sadly, this isn’t a chance for Hanh to make her dreams come true – it’s a one way ticket to modern slavery. What follows is a gripping but distressing description of how these poor children are kept captive, beaten, mistreated and made to work impossible hours sewing and distressing jeans for customers who want cheap and disposable clothing in the rich world.

The youngsters learn how to survive but animosity and treachery can be as commonplace as friendship and the slightest sign that you’re not pulling your weight is met with terrible physical punishment. Girls injure themselves to try and get out of the factory but they are shown no mercy and put back to work whatever their physical condition.

But Hanh isn’t prepared to give in and she hatches a plan to escape……..

I’m not going to tell you the rest of the story because you will want to read that for yourself. What I will say is that the author doesn’t give us an easy ending and there’s no suggestion that there’s a simple solution to the way the clothing industry exploits child labour. What Steve Cole does do however is to provide a few short pages at the end that tell the reader what led him to write the book and some of the real-world politics that lie behind it.

As with the previous books in Steve Cole’s series for Barrington Stoke there are black and white illustrations here by  Oriol Vidal and the colour drawing for the cover deserves special mention as a mood-setter for what’s to come.

The book is published this month and you should be able to order it from your local independent bookshop but if that’s not possible you can go directly to the Barrington Stoke website and order it directly from them.