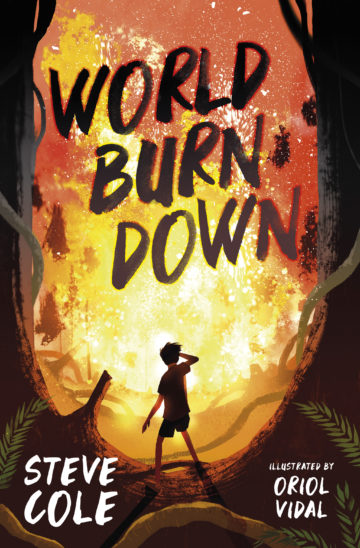 World Burn Down by Steve Cole

Following on from their 2019 collaboration, Tin Boy, Steve Cole and illustrator, Oriol Vidal are back with another great novel from the Barrington Stoke stable. Tin Boy told the story of the exploitative tin mining industry of Indonesia and now Cole takes us to the scene of another terrible environmental disaster area – the Amazonian rain forests of Brazil.

And just as he does Tin Boy, Cole tells a fast-paced gripping adventure story that mixes oodles of jeopardy with some skilfully introduced politics. In this case at the same time as being gripped by the central storyline about an abduction we also learn about the way illegal miners and loggers are cutting swathes through one of the world’s most important ecosystems.

Carlos’s mother, Captain Monica Feliz, works for the agency that tries to protect the rain forest from illegal exploitation and she’s so dedicated that she’s become a target for the criminals – they’ll go to extreme lengths to scare her off. That’s bad news for Carlos who finds himself being kidnapped as a hostage to help persuade Monica to leave the area and stop her work against the loggers.

One of the tools the illegal loggers use is fire – they set fires that run wild through the forest, clearing ground in which they can set up their operations. But no-one can control the fires and they pose a threat to all life in the area – including Carlos and his kidnappers. Following an accident in the car that has abducted him, Carlos escapes and runs off into the jungle only to find himself surrounded by wildfire – things look bleak.

But he’s saved by a mysterious boy who emerges from the jungle – a strange young man with an odd physique and a peculiar manner leads him away from immediate harm but not quite to safety….

How will Carlos ever find his way back to his mother from the heart of a jungle on fire? Even if he gets back, what’s going to happen next? He knows these criminals will never give up trying to intimidate his mother and he knows full well that they more than happy to use him as leverage.

Well, I’m obviously not going to tell you what happens to Carlos, his mother and the strange young man who saves him – you’ll have to read the book for yourself to find out what happens.

Ultimately, however, you might well think that the story of what’s happening in the Amazon is actually much more important in the end than what happens to Carlos – and if that’s the conclusion you reach then I think Steve Cole’s book has done its job.

Oriol Vidal’s illustrations black, white and shades of grey does an excellent job of adding some visuals to the story and Cole has also given us a short essay at the end about the situation the rain forests face and why it’s a story that needs to be told.

I can absolutely guarantee that you’ll sit and read this book from cover to cover and be completely gripped as well as outraged. It’s a great read at every level.