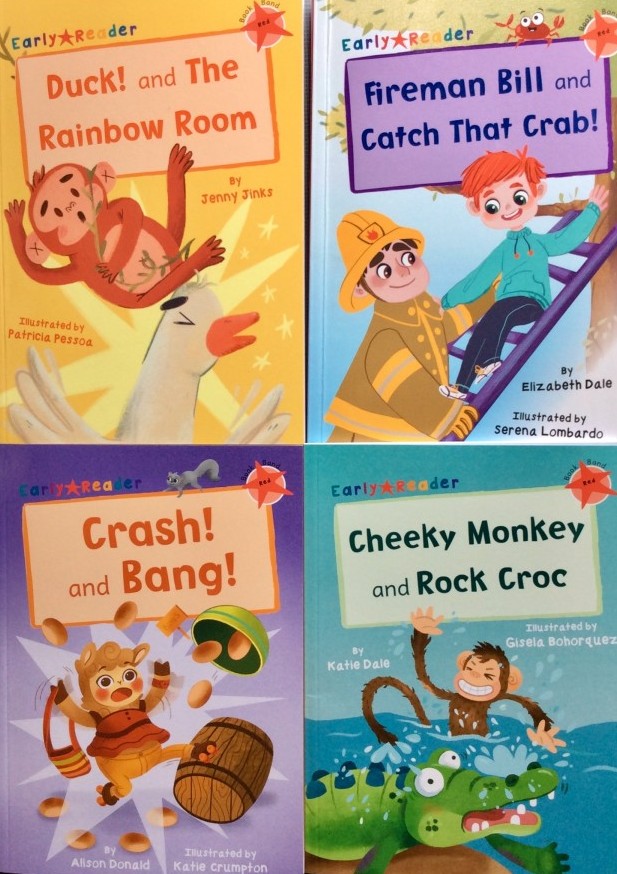 I was delighted to receive another batch of excellent books from the Maverick Early Readers range, examples of which have been reviewed elsewhere on this site (here, here and here).  As ever, each one is beautifully illustrated with minimal repetitive text, the overall layout of which form interesting little plots to enthuse young readers. All of these titles are from the Red Book band which is the second band designed for ‘guided reading to the industry standard and edited by a leading educational consultant’.

Everyone likes a story about a mischievous character and this cheeky monkey fits the bill perfectly. Time after time he surprises unsuspecting animals with his pranks but he gets his come- uppance when he slips into a muddy puddle and they all have a good laugh together.

Ron The Crocodile appears again in the second story as a wannabe trumpet player in a wind band of colourful parrots. Their facial expressions and body language show that he is not at all musically talented! Undaunted, he tries to join a Lion string band, this time demonstrating his lack of talent playing a violin. The hippos also reject him from joining their harp band. But his persistence and self- belief pays off when the rock band of friendly looking Gorillas accept him to play percussion – a happy ending with everyone dancing.

Fireman Bill and Catch that Crab by Elizabeth Dale, illustrated by Serena Lombardo

It’s always reassuring to know that a friendly fire-fighter is at hand to rescue children who might get stuck up trees and down wells. The smiling Fireman Bill also responds to a call to save a horse that has got stuck in a bog but ends up needing some help himself! It’s a joint effort to solve the problem from two children and the horse and all ends well.

I liked the second story which shows a blissfully happy crab strolling along the beach, unaware that a little girl has him in her sights and wants to catch him. She is very determined to put him in her bucket but he is very good at hiding and watching as she finds other interesting treasures buried in the sand.  He also has the last laugh when he grabs onto her dad’s foot at the end.

Duck! And The Rainbow Room by Jenny Jinks, illustrated by Patricia Pessoa

Poor duck seems to be very accident prone and keeps getting banged on his head. After several nasty bumps he retreats to bed with a large ice pack to soothe him. While he is resting, the other thoughtful animals organise a delivery of a crash helmet to protect him and he's confident to go back into the world.

Magic is the theme of the second story when three children take turns to use their powers to transform a bedroom into their preferred colour. When their witchy mum tells them off for creating a mess they realise that they all rather like a rainbow effect. A good example about the importance of compromise and team work.

Crash and Bang by Alison Donald, illustrated by Katie Crumpton

Wearing roller skates to do the shopping might speed things up but can also cause complete chaos. Lil the lamb crashes into a display of buns, then fish and then a pyramid of jam jars. She is suitably mortified at the dreadful mess she has made but everyone is pleased when she is able to mop it all away very quickly and efficiently.

Her next adventure shows us how being nervous about camping can make it difficult to sleep. Luckily she has her very sensible friend Sal to keep her calm. That is until they both think that they have spotted what seems to be a bear.

I know that my five year old grand-daughter is now ready to move onto this band having thoroughly enjoyed ones from the Pink Band. I will be popping these in the post and very much look forward to hearing her read them to me via Skype.