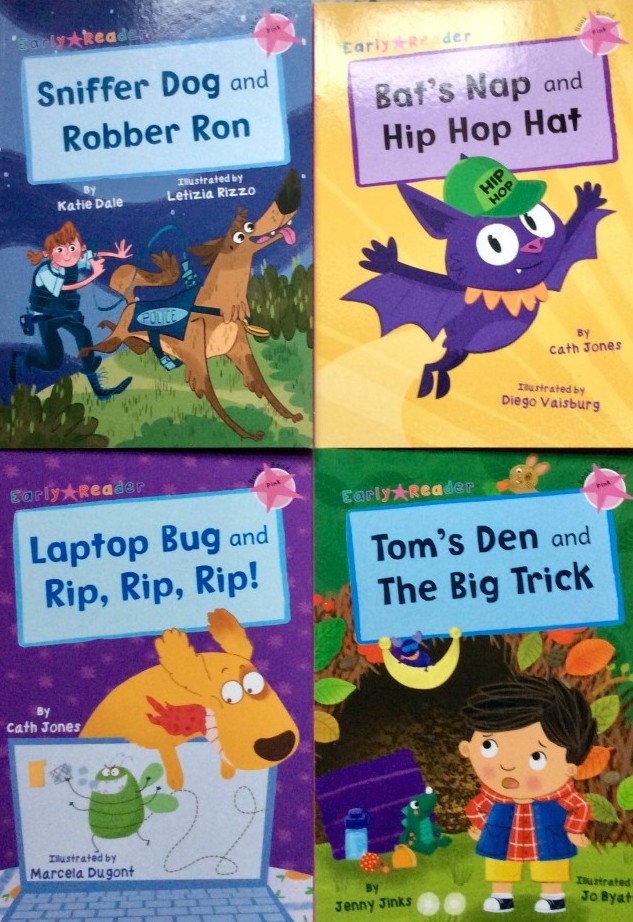 I was delighted to receive another batch of unusual little reading books to review from Maverick Arts Publishing, a company which takes such excellent care in producing aesthetically pleasing picture books that are designed to engage younger readers.

This included a selection from the Pink band, which is the first stage in the series that is ‘banded for guided reading to the industry standard and edited by a leading educational consultant’. In my view this introduction to independent reading is probably the most crucial one because it helps new readers gain confidence and enjoyment.

Angry Kim is shown looking frustrated as her laptop just won’t work. Mum tries to fix it, then Dad - but to no avail. Then we see that the problem is actually a green bug that appears on the screen. What can they do to make it work again? Luckily Kim’s Gran seems to be the go-to person to solve mechanical problems so she pauses from fixing the radio to work her magic on the laptop. This is a welcome change from the usual stereotype of oldies being technologically useless!

The next little story shows Kim and her Dog relaxing on their beds, that is until the Dog starts to tear his to shreds with his sharp teeth! He gets told off, but then is dismayed to find that he has nowhere to sleep for the night.  I liked this one because of the possibilities for discussion beyond the text and illustrations. Why on earth did he destroy his lovely bed? Should he even be sleeping in the same room as Kim if he is likely to destroy bedding so viciously?

Pip is a Scooby Doo-like Police Dog who leads his handler across the pages in pursuit of clues. At first he finds a cat that needs rescuing, then reunites a woman with her lost bag but then his job becomes more serious when he smells a robber. In true picture book tradition, she is wearing a mask which immediately identifies her as a baddie and she is handcuffed accordingly. Pip’s excellent nose smells a snack and he is duly rewarded. Why was the robber breaking into the house and what will happen to her next I wonder?

The next story focuses on another robber who also dresses up helpfully as he prepares to use his van for probable nefarious purposes. He gets a shock when the door of the house he seems to be intending to burgle is opened by a Policewoman in full uniform! But on the turn of the page the story gets a twist as we see that they are at a fancy dress party and join a Dragon and Pirate to have a great time. Clever readers will spot that Pip the Dog is also there plus his handler who is dressed as a Princess. This is an interesting contrast with the previous story that shows the breadth of lives beyond professional roles.

Everyone surely knows that the sound of bells are all very well in small doses, but who would be able to sleep by one?  Bat doesn’t seem to know this and so chooses to make a hammock right underneath and is rudely awakened when Cat mischievously pulls on the rope. Together they reach a solution to ensure that they both get a good nap, although the bell ringer may not be too happy about what they do.

The two creatures are joined by Hen for their next adventure which involves choosing hats from a selection in a box. It seems that they might be going to play together as part of a band as we can see a stage set with various instruments in the background. Once they have chosen the hat that best suits their image, Rap Bat, Pop Cat and Hip Hop Hen give a lively performance joined by Bug who eventually finds a hat to suit him as well.

Tom’s Den and The Big Trick by Jenny Jinks, illustrated by Jo Byatt

I liked the child-centred plot showing Tom comfortably ensconced in his exciting outdoor den made with sticks and autumn leaves, that is until it is invaded by multiple bugs. There are so many that he is forced out as they settle in playing music and dancing happily. Can they live together in harmony? This seems unlikely until a compromise is reached and both Tom and the bugs are shown looking very satisfied with the result.

As ever, these stories are simple, witty, repetitive yet eventful with familiar words reinforced and letter formation plus related activities included. The brightly coloured illustrations include plenty of additional information to keep the reader interested.  I strongly recommended these to all parents and teachers who want to make learning to read a fun experience.