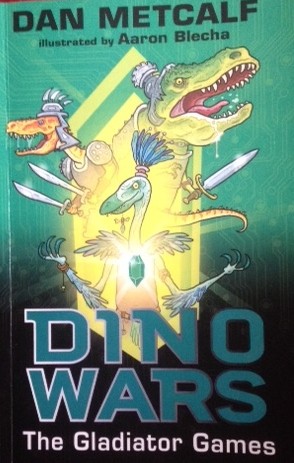 We’re back on the quest for crystals in this, the third part of a projected quartet of Dino Wars books. We have already reviewed Part One and Two and so I was keen to get my hands on this one to see what Adam and the rest of the crew are facing this time.

Just by way of brief context: Adam, Chloe and dino Dag have been joined by a crew of other compatriots on an unusual mission to find four crystals that will disarm a doomsday device which, if it was triggered, could mean that all dinosaurs on Earth are wiped out. The weapon is a hang-over from the Dino Wars when genetically engineered dinosaurs and humans went to war with each other. The dinosaurs won the war but now the few remaining humans have the chance to establish a long-lasting and harmonious peace and collaboration with them – if only they can prevent dinosaur Armageddon.

It’s a race against time and getting hold of the crystals has proved more of a problem than might have been expected. Now the team are contemplating a less harrowing time in the Valley of the Ornithopods – just as long as they find their way around Rextopia – the scary territory of the Tyrannosaurus. A great plan as long as it all goes smoothly – and of course it doesn’t.

Problems really start when our heroes are attacked by a gang of Troondons – small fast-moving dinos who are looking for booty. They take the human females of the group prisoner to sell as prize game fodder in Rextopia where the T. Rex’s will put them into the Gladiator Games.

How will they survive in the terrifying environment of gladiator games fighting the most fearsome champion that the Rex’s can find? Will cunning and speed save them or is their mission for the crystals doomed?

Well, here’s the twist: if they can survive they can also come away with the crystal they need which is the prized possession of the Games Master who is holding them as prisoner.

And can the boys get into the Games without being rumbled and help them? It doesn’t look likely when they are set to work cleaning out the very basic T. Rex toilets! Hold your nose when you read this bit……

Another great adventure from the Maverick stable to capture the imagination of the young reader and for any teachers wanting to use the series in class, there are a number of suggested discussion points at the end that might help with some structured comprehension.