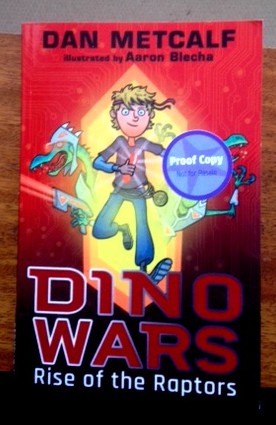 Dino Wars: Rise of the Raptors by Dan Metcalf illustrated by Aaron Blecha

Due for release by the excellent Maverick publishing house in April, Dan Metcalf’s Dino Wars: Rise of the Raptors is the first instalment of a four part series that will see a classic quest-style mission undertaken by an unusual partnership of humans and dinosaurs.

Set well into the future – 3142AD to be precise – genetically engineered talking and thinking dinosaurs have taken over the planet after having overcome humanity in the Dino Wars. What’s left of the human race now lives in secluded camps alongside the friendly, peace-loving herbivorous dinosaurs and well away from the terrifying raptors who remain hostile and war-like.

In camp Bastion our hero Adam Caine and his sister Chloe live alongside their best friend, Dag who happens to be an Iguanodon – but a tech-savvy one at that. During the course of a typically rumbustious bit of trouble-making they accidently uncover the door to a secret bunker that dates back to the original dino wars and through a combination of accidents and misunderstandings trigger a secret weapon that’s been lying dormant all this time – a biological germ warfare device that will kill all dinosaurs - even their best friend.

They’ve triggered the device to go off and if they’re going to stop it releasing its deadly spores they have to work out how to terminate the programme. Fortunately they’ve got a copy of the operating manual and, even more fortunately, Dag can work out what they need to do. And it’s not good news.

They need lots of power; the kind of power that can only come from four Dilotron crystals – and they’ve only got the one that’s in Bastion. The others have to come from other camps – camps that are hostile and won’t want to surrender their crystal. And so the quest begins. First stop Raptor City and an encounter with the raptor who rules the camp – Stryker.

By this time Adam has gathered a small team together to help him in the quest but that doesn’t look like it will be enough to take on the fearsome raptors on their own home turf and there’s plenty to worry about when they discover that Stryker wears his Dilotron crystal as a pendant!

Will our intrepid team get their hands on the second crystal and how will they do it without being torn to pieces by the raptors?

Well, you’re going to have to read it yourself to find out…….Let me just say that the excitement and the fun levels are satisfyingly high!

At the end of the book you also get a teasing little taster of the next instalment in the quest to make sure you keep reading – always a clever little ploy I think.

American born, UK-based Aaron Blecha has done the comic-book style illustrations that feature throughout the book and which will keep the younger reader amused. I especially like the occasional full page illustration like the one of Stryker’s monument that the team stumble on when they first smuggle their way into Raptor City.

I’m pretty sure that younger readers who discover this first book will want to stick with the four instalments and they’re going to look forward to each new publication with some eagerness I suspect.