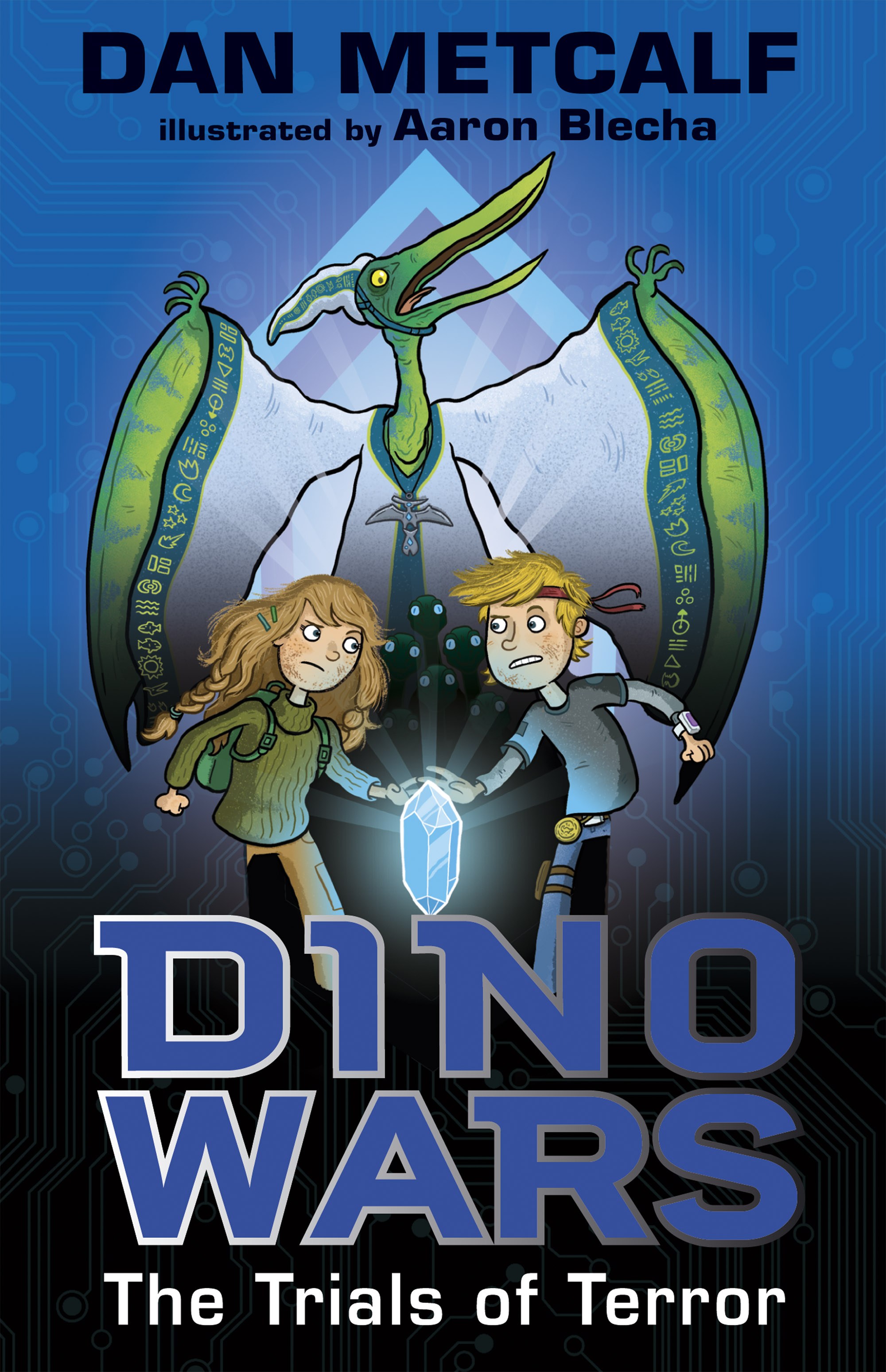 Dino Wars: The Trials of Terror by Dan Metcalf

This is author Dan Metcalf’s second instalment of the projected four part series, Dino Wars. For readers new to the series, you can fill-in some of the background by looking at our review of the first book, Dino Wars: Rise of the Raptors on this link but, if you haven’t read Book One, don’t worry, the story can be easily picked up and this stands as an exciting enough story in its own right.

Adam Caine, his sister Chloe and a collection of intelligent, genetically engineered dinosaur friends are on a quest to gather four Dilotron crystals that they need to disable a doomsday weapon built during the years of the Dinowars by humans. This weapon was designed to wipe out all dinosaurs but now that the wars are over and humans and dinosaurs have learned to live in a sort of neighbourly (if wary) cohabitation, this would be disastrous.

Two crystals have already been safely tucked away in their backpacks and now they have to find number three. Crystal number three is to be found in Pteratopolis – a spectacular fortress built by the pterosaurs, flying dinosaurs who have never before allowed humans into their stockade. Finding their way in is a major challenge in its own right but then there’s avoiding the flying guards and their zapper weapons – and all just to find a way into the inner sanctum.

Once inside they discover that the crystal they want is being used by the pterosaurs as a religious artefact and getting them to agree to give it up is going to be no easy task. But there’s hope because the custodian of the crystal, D’Arpeth, is much more friendly than they expected and they even get welcomed with a meal of regurgitated fish (yuk!).

But, of course, it’s not going to be easy even after they’ve explained why it’s vital they get their hands on the crystal. D’Arpeth explains that there is a Scroll of Fortune – a set of sacred writings – that foretell the coming of ‘a hero’:

“’And it is foreseen that into the home of the pterosaurs shall come a hero, ready to serve their kin and their world. And this hero shall take the holy stone for the greater good, after completing the trials.’”

But what are the trials? And who will be the hero? Here’s a clue:

“ ’Enter the labyrinth!’ he boomed. ‘Behold the secrets! Retrieve the holy stone! Only the true hero will succeed!’ “

I’m obviously not going to tell you what happens – you’ll have to read that for yourself. Younger readers they will be on the edge of their seats as Adam and Chloe do their Indiana Jones impersonation and there are plenty of unexpected twists.

Dan Metcalf has built successfully on the first book and has continued to fill in more details of the characters. Adam and Chloe spend even more time in sibling bickering, Dag becomes more indispensible and stolid and Benji and Tuppence provide plenty of laughs with their antics.

Maverick, who publish this series, have again provided two or three pages of the next book at the end of this one as a taster for what’s to come in Book Three – a clever wheeze to keep us all hooked.