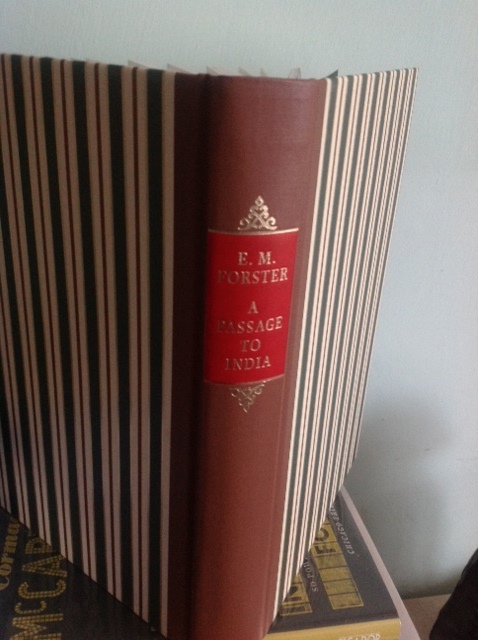 A Passage to India by E.M. Forster

In 1912 Forster embarked on what would be a six month trip to India that was inspired by his unrequited romantic feelings for a young Indian man, Syed Ross Masood, who he had met some six years earlier. In July 1913 after returning from the trip he began his ‘Indian’ novel and many of his experiences while on his travels around that country went directly into the planning of this new book.

It turned out to be a book that caused him plenty of difficulties and it didn’t find its way into print until June 1924, over a decade following its conceptualisation. Clearly the advent of war in 1914 added to Forster’s extended gestation but that was only part of the story. As Damon Galgut points out in his piece on Passage to India published by The Guardian in 2014:

“Oliver Stallybrass, who collated and edited the original manuscripts of A Passage to India, believed that it was on the question of what happened, or didn't happen, to Adela Quested in the Marabar caves that Forster foundered. He points out that the extant earliest versions of the scene look like fair copies, as if previous attempts had been written out again and the originals thrown away.”

I’m pretty sure that Forster’s struggles with the book arise in some part from his recognition that what he was trying to do with this book was going to be divisive and controversial. And so it proved – and continues to prove.

As the quotation from Damon Galgut suggests, the plot of the book hinges on a specific event involving Adela Quested who arrives in India with the mother of the man she is planning to marry. He, it turns out, is a minor and bigoted colonial official. The two women meet Aziz, a young Muslim doctor who believes he might be able to bridge the cultural gap between the Indian population and their colonial occupiers. In an attempt to build these bridges and desperate not to offend, Aziz finds himself organising a visit for the two women to some local caves where an ‘incident’ occurs that results in Adela Quested claiming that she was sexually assaulted by Aziz.

He is arrested and tried – a trail that highlights the fissures between Indians and colonial occupiers. Although most of the British assume Aziz’s guilt is proven simply by accusation, Adela withdraws her charge when she realises she was mistaken and that her hysterical response to whatever happened in the caves was a reaction to what her visit to India had triggered in her own psyche.

As a result of his experience, Aziz is ‘radicalised’ and no longer believes he can find the common space between cultures. His one friendship with the British schoolteacher, Fielding, is badly damaged and despite the fact that there is some rapprochement, the final lines of the book suggest that India and Britain are not ready to find a new East-West relationship:

"But the horses didn't want it – they swerved apart; the jail, the palace, the birds, the carrion… they didn't want it. 'No, not yet,' and the sky said, 'No, not there.'"

At the time of its publication Forster found himself under attack for his pretty direct condemnation on the mentality behind British colonial occupation. The rather limp Fielding apart, all of the British in India that populate this book are deeply invested in the sort of explicit and casual racism that underpinned the idea that British influence was a ‘civilising’ one. But post-war criticism has followed too, suggesting that he had in fact not gone anywhere near far enough in his criticisms of Imperialism. Commentators such as Edward Said have pointed out that Forster still bought heavily into the ‘orientalism’ that was such a common element in white, European culture. India itself is constantly described in negative language as mysterious, unknowable and too big for the Western mind to comprehend while the people are seen as unreliable, needy, lazy or mystically inclined – either essentially dangerous or humorous.

Of course, Forster was a man of his times and you have to ask whether it’s entirely fair to criticise him for not having more modern opinions about ‘race’ and racism. Reading this book again it seems to me that actually the iniquities of racism and imperialism are only part of Forster’s concerns in this book. What is undoubtedly also a key part of his intention here is to explore the relationship between life and art. About half way through the book, Forster says this:

“ Most of life is so dull that there is nothing to be said about it, and the books and talk that would describe it as interesting are obliged to exaggerate, in the hope of justifying their own existence … There are periods in the most thrilling day during which nothing happens, and though we continue to exclaim “I do enjoy myself” or “I am horrified” we are insincere. “As far as I feel anything, it is enjoyment, horror” – it’s no more than that really, and a perfectly adjusted organism would be silent.”

For me this a key statement because Forster is signalling to us that actually the job of the author is to order reality into a story – a story that really isn’t there or isn’t there in the form of a storyline. Actually, life is random and unknowable but – as religion proves – human beings hate meaningless random existence. The novel tries to resolve this randomness into meaning but in truth that often isn’t more than a creation of the author. What happened to Adela Quested? No-one knows, not even Forster. Something happened. It has consequences. What more explanation can there be?

I really like Elizabeth Lowry’s summation of the book as it appeared in her 2020 essay for the TLS:

“And silence is what A Passage to India gives us. All its clues and links are a diversion on the quest for meaning, a detour, that lead us to the central revelation of the book: that there is none. At the heart of A Passage to India there is a hole. Various philosophic statements have been attributed to its central mystery, the mystery of what happens in the Marabar, variously framed in Hindu, Jain or Jungian terms. Its final message is one of hope; its final message is one of despair. But its final message is no such thing. It is, quite literally, nothing.”

I think that captures it perfectly. Not surprisingly, Forster never wrote another novel after this one. He’d said everything he had to say.

Paperback copies of the book are easily available in several formats for not very much money and this is, I would suggest, one of the essential books of the 20th century.

A Room With A View