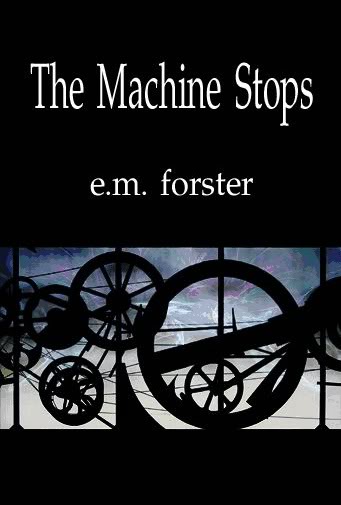 The Machine Stops by E.M.Forster

It would be tempting to read this short story ( it's ony around 12,500 words long) as in some way prophetic, predicting the emergence of our contemporary society which has become overly dependent upon the new technologies it has created -  the world wide web and its various social media spin offs. However, I think that would be a misreading and over-simplification of Forster's ideas and it would in some ways de-politicise his key message.

Published in originally in an obscure magazine in 1909, it got it's first real exposure in 1928 in a collection of other short stories and it can be argued that The Machine Stops belongs much more to the world of H.G.Wells, Aldous Huxley and even George Orwell than to the kind of science fiction we saw develop later. The story itself is disarmingly simple: in a post-apocalyptic world, what is left of humanity now lives underground, shielded from the natural world by an all-seeing, all-knowing 'machine' that anticipates their every move. Not everyone is happy about the total control of experience and emotions the machine is able to exercise and dissent sets in amongst a few citizens until, eventually, the desire to be fully human again results in the machine's grip being broken and, ultimately, the machine stops.

It's easy to see, even from a summary of this brevity, that this isn't a story about the threat or reach of technology but about the nature of the totalitarian State. Rather than anticipating the emergence of the new technologies, Forster seems to me to be much more concerned with the kind of politics that will eventually create Nazism or totalitarian Communism and it is the  desire for States such as these to organise and control their citizens that is really the focus of this fable. The machine is a metaphor for a State that cannot give its citizens the freedom or capacity to make their own decisions and justifies its all-pervasive presence by offering the ultimate protection from the outside world and by taking away from people the need to make even the most basic decisions - the machine, for example, even puts you to bed when you feel fatigued.

Action of any sort is frowned upon and the decent citizen deals only in ideas - talking endlessly about possibilities of the perfect society and lecturing each other about philosophies. This is clearly a side-swipe at the Left and it's seemingly bottomless passion for reinterpreting texts while doing nothing concrete to improve the situation of the oppressed. Indeed, in this sterile society run by the machine, humans have become, by their inaction, less than human.

The machine has taught the citizen to fear the outside world - contaminated as it is by whatever had precipitated the apocalypse. In fact, it is interaction with the outside world that reinvigorates those who struggle to make contact with this forbidden zone and ultimately brings the machine to a halt. Forster is clearly pointing out the dangers of isolationism and is making the case for the need for free ideas to flow out and back in to states which have closed their borders and their minds to new ideas.

Forster's liberal humanism allows him to believe that single acts of dissent and rebellion or the irrepressible human urge to be free can set in motion fundamental change even within the most repressive state apparatus - a set of ideas people cling onto despite the evidence of history. Totalitarian governments only fall when bigger - more cunning - versions of state control replace them. It wasn't individual acts of rebellion that brought Soviet communism to its knees but the remorseless logic of a new monster, neo-liberal capitalism - a different sort of tyrant that is busy wreaking its own brand of soul-destroying repression. The machine hasn't stopped, we've just swapped it for a new one.