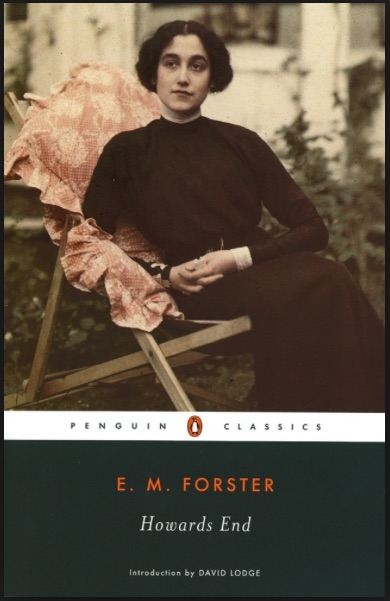 I’m not sure that I have ever finished anything else by Forster that I have attempted to read, and I’m not sure what made me turn to Howards End, his 1910 novel, other than the fact that a couple of weeks ago I bought a cheap secondhand Penguin edition in an Oxfam shop. But I’m so glad I did because for all its faults I found it an utterly engrossing novel. This edition, in the black Penguin Classics series, has an extremely informative introduction by David Lodge, which sets the novel in the wider context of Forster’s work and time.

This isn’t a ‘difficult’ novel, exactly, but nor is it an easy one. In reading it one has to be alert to its tone, to Forster’s sense of irony, even satire, and to the sometimes rather abstract expression his characters give to the ideas and circumstances they grapple with. It isn’t a light comedy of manners, and nor is it quite a novel of philosophical ideas; but it does fall somewhere between these two things. Perhaps it is a novel of social observation – it is certainly an absorbing time capsule of ideas and attitudes at the beginning of the twentieth century.

In essence, the story is that of the chance meeting (although ‘meeting’ barely describes what unfolds: collision is probably a more accurate term) of the upper class Schlegels, two half-German sisters, Margaret and Helen, and their younger brother, Tibby, and the nouveau-riche Wilcoxes, a wealthy middle class family (interestingly, Forster describes them as bourgeois) whose money has been made in colonial business ventures.

The Schlegels have been orphaned at a young age and have been cared for by an aunt. They now live together in a self-sufficient household, amply provided for by their inherited wealth. Today we would perhaps describe them as upper class intelligentsia. They are left-leaning, concerned with equality, feminism and women’s suffrage, but also profoundly attached to culture and the arts and the world of ideas and the intellect. The Wilcoxes by comparison are rich philistines, but especially in the form of Mr Wilcox are seen by the Schlegels as exemplifying a new kind of mercantile savvy, a rootedness in the hard pragmatic world of business and money that cannot quite be discounted. The qualities of the Wilcoxes – no matter how money-grubbing, how regressive, how smugly self-centred – are after all precisely those that have protected and increased the Schlegels’ investments and ensured them an independent private income that means they will never have to work.

These, then, are the central social ideas – the central social tensions – at the heart of Howards End, and if they sound unpromising material for a 300-page novel then Forster’s triumph is that he creates from this a human drama rooted in social conflict that succeeds despite its occasional implausibilities.

But something more makes this novel fascinating – and I’m going out on a limb here because what I know of Forster is extremely limited: it is his dialogue with Bloomsbury, with the ideas and attitudes of Virginia Woolf and her circle.

Not only do the Schlegels resemble the orphaned Stephens family – Virginia, Vanessa, Thoby and Adrian in their parentless ménage at 22 Hyde Park Gate and latterly in Bloomsbury – but the inner voices of the Schlegel sisters, especially that of Margaret, the older, are astonishingly close to the voice of Woolf herself as heard in her diaries and letters and essays. Forster as I understand it was only ever really a peripheral participant in Bloomsbury circles, but what Howards End shows, I think, is that the attitudes and politics of Bloomsbury – one might almost say the sociology of Bloomsbury – preoccupied him deeply.

David Lodge does an excellent job of explaining the flaws of Howards End. He is also more than fair in explaining its greatness despite these flaws. Where he seems on less certain ground, however, is in deciding the extent to which some of Forster’s most egregious pronouncements on the poor are intended ironically. My own view is that they are – but I must say the uncertainty adds to rather than detracts from the interest of the novel.

I felt engaged by Howards End at every level. I wanted to find out what happened next (the story is actually quite exciting, even allowing for some of the more implausible coincidences and situations), and I wanted to see how these complex ideas of social class, wealth, exploitation, greed and personal responsibility would play out. The novel is also a period piece but this too adds to its strength and its interest. Find out at first hand what the upper class intelligentsia thought of the encroachment of the motor car, of London’s new mansion flats, then just being built by wealthy developers, of the loss of the countryside, of servants. It is not a coincidence, I don’t think, that one finds Woolf herself commenting on these and many other issues of the day in her diaries and letters. Perhaps I am drastically oversimplifying the matter here, but at times I found it hard not to read Howards End as if it is addressed primarily to Virginia Woolf herself – as if she somehow is its most important reader, its intended audience.

Anyway, this was a delicious surprise because I began it with every expectation that I would cast it aside unfinished. In fact, I relished every page.

And what a wonderful cover this Penguin Classics edition has in Lionel de Rothschild’s ‘autochrome of an unknown woman, c.1912’.  A closer representation of Margaret Schlegel would surely not be possible.