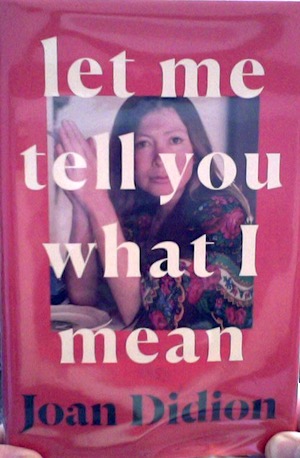 Let Me Tell You What I Mean by Joan Didion

I bought this slim volume of previously uncollected essays by Joan Didion with some trepidation: there was a risk that the pieces might be second-rate or turn out not to have aged well. I’m delighted to be able to say that this isn’t the case. Not only are the twelve pieces published here well up to standard, they are also subtlely different to the kind of pieces in her earlier collections, Slouching Towards Bethlehem and The White Album and show Didion in a slightly different light.

In terms of composition, the essays range from 1968 to 2000. There are three autobiographical pieces: two about the act of writing (‘Why I Write’ and ‘Telling Stories’) and one about being rejected by Stanford University.

There are rather more essays about other artists than is usual for Didion, with perceptive and revealing pieces about Robert Mapplethorpe, Ernest Hemingway and the film director Tony Richardson. In each of these I felt she had something new or revealing to say about the artists in question and their work.

There are two profiles of public figures – Nancy Reagan and Martha Stewart, with the latter being a far more sympathetic account than one might have expected would be the case.

Of her more usual reportage-style pieces, there are essays on Alcoholics Anonymous, the William Randolph Hearst mansion, a military reunion dinner, and the underground counter-culture press of the Sixties.

I think my favourite piece in the book is probably ‘Telling Stories’, in which Didion recalls her early writing years. The essay opens with an account of her participation as a nineteen year-old student at Berkeley in the highly acclaimed writers’ workshop taught by Mark Schorer:

“…I remember each meeting of this class as an occasion of acute excitement and dread. I remember each other member of the class as older and wiser than I had hope of ever being (it had not yet struck me in any visceral way that being nineteen was not a long-term proposition), not only older and wiser but more experienced, more independent, more interesting, more possessed of an exotic past: marriages and the breaking up of marriages, money and the lack of it, sex and politics and the Adriatic seen at dawn…”

She managed to write only three of the five required short stories, she admits, and then wrote no more fiction for ten years. But that doesn’t mean she wasn’t writing, because from Berkeley she went straight to Vogue in New York City, where she wrote “merchandising copy” and “promotion copy” and eventually “editorial copy”. And of this period she says:

“It is easy to make light of this kind of ‘writing’ and I mention it specifically because I do not make light of it at all: it was at Vogue that I learned a kind of ease with words, a way of regarding words not as mirrors of my own inadequacy but as tools, toys, weapons to be deployed strategically on a page.”

It is only a short piece but it is extremely evocative and reminded me of a memoir by another writer who learned her craft at Vogue and Mademoiselle in the late-50s and 1960s – Mary Cantwell’s Manhattan, When I Was Young (reviewed here on Letterpress).

Whether you consider Let Me Tell You What I Mean to be essential Didion or not will depend on your enthusiasm for her work. I think these pieces add a new dimension to Didion’s essay writing and I wouldn’t be without them. What I would say, however, is that the hardback is very slender indeed for £12.99, even more so if you omit the rather annoying and unnecessary 35-page foreword, and they are small pages at that and the font is quite large. It also has an extremely amateurish cover design. If I hadn’t already spent the money I would be waiting for the paperback to come out (January 2022). I think there’s every chance it will be a more elegantly produced book.

Slouching Towards Bethlehem by Joan Didion

Play It As It Lays by Joan Didion

The Year of Magical Thinking by Joan Didion