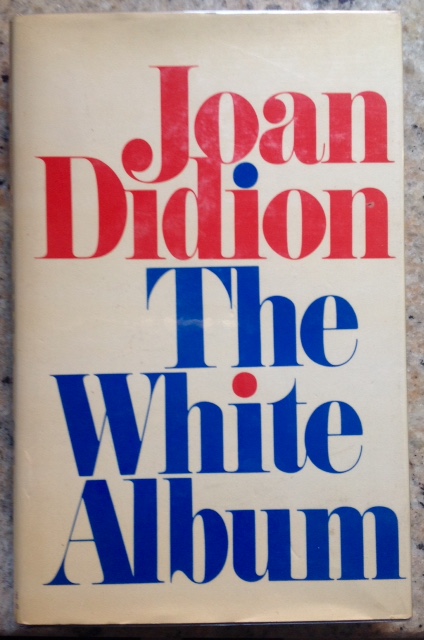 Over the past few years I’ve given Joan Didion something of a hard time here on Letterpress. Reviewing her seminal, first collection of essays and journalism, Slouching Towards Bethlehem (here), I said that her first subject was always really herself. I said that her 2005 memoir, The Year of Magical Thinking (here), contained some of her worst faults writ large. And I admitted that if I am not in a receptive mood when I read her then that steely gaze, that almost affectless tone, and that anguished, mandarin style – all signatures of her work – are merely grating rather than great.

I was reminded of this recently because over the past couple of weeks I have been slowly rereading The White Album, her second major collection of essays (1979). I obviously was in a receptive mood because I found myself thinking it may be even better than Slouching, and that its finest pieces have aged better and more gracefully than some of the earlier work.

Taken together, these two collections show the breadth of Didion’s interests, but it is true that the gradual souring of Sixties idealism and the mounting paranoia and violence as the decade neared its end do emerge as central to her concerns. But it is a mistake to think of her (as I think I once did) as a chronicler of alternative lifestyles and the counter-cultural underground. Her subject was never really social change as such; her real interest is entropy, social collapse, and the superficiality and self-indulgence she perceives in the populist movements she disagrees with.

Taking the title of her first collection, Slouching Towards Bethlehem, from Yeats’ poem ‘The Second Coming’ and prefacing it with the poem in full reinforce this view. ‘Things fall apart,’ Yeats wrote, ‘the centre cannot hold; / Mere anarchy is loosed upon the world.’ There is little doubt that this is the dark mirror that Didion held up to contemporary history. Read her scathing account of ‘The Women’s Movement’; read her skewering of the writer Doris Lessing in the essay of that name. But read especially her excoriating account of the murder of actor Ramon Novarro (1968), the Manson Family killings (1969) and the collapse of the Sixties dream in The White Album’s title essay. Laurel Canyon, that lofty enclave of writers, artists, musicians and communes emerges not as paradise but pure Hollywood noir. ‘Many people I know in Los Angeles believe that the Sixties ended abruptly on August 9, 1969,’ Didion writes. ‘The tension broke that day. The paranoia was fulfilled.’ And ‘I also remember this,’ she adds (imagine it whispered through clouds of cigarette smoke), ‘and I wish I did not: I remember that no one was surprised.’

These are marvellous pieces but I also found myself drawn again to some of her odder, less predictable and enigmatically beautiful essays – for example, ‘Holy Water’, about the mechanics of California’s water distribution system, or ‘The Bureaucrats’, about the LA highways authority. And then turn to ‘Notes Toward a Dreampolitik’: others may be preoccupied with realpolitik, but Didion’s concern is the politics of the imagination.

Reviewing the collection on its original publication, Martin Amis described it as ‘a volatile, occasionally brilliant, distinctly female contribution to the new New Journalism, diffident and imperious by turns, intimate yet categorical, self-effacingly listless and at the same time often subtly self-serving.’ Back-handed praise it may be but it is nonetheless a very succinct summary.

You may sometimes dislike Didion’s opinions but what I admire is that she is not a revisionist: these essays are not a post-hoc rationalisation of the Didion view. No, they were written at the time, while events were still warm, as it were. The White Album opens with what has become one of Didion’s most famous sentences: ‘We tell ourselves stories in order to live.’ Well, these are the stories she has told us; these are the assignments that got her out of bed, that required her to keep a packing list taped up on her closet door (‘…two skirts, two jerseys or leotards…bourbon, cigarettes…mohair throw, typewriter’) so that even when scarcely awake a bag could be methodically filled in minutes and she could be out the door.

Her greatness is now more contested than once was the case (her treatment of her adopted daughter, Quintana, for instance, has come under scrutiny), but it is not hard to see why the glamour – the intellectual glamour – of Joan Didion has proven imperishable.