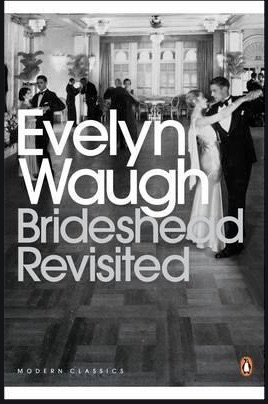 A couple of years ago when I reviewed Evelyn Waugh’s Put Our More Flags I recommended it highly saying it had greater depth, dryer humour and less farce than some of Waugh’s early novels. The early novels, I said, were sometimes almost as brittle and silly and fatuous as the milieu of Bright Young Things they lampoon. I still feel that to be the case and I really have to be in the right mood for them or I am quite likely to throw them aside in disgust.

But for depth and seriousness – and length, it must be said – the novel which stands head and shoulders above the others in Waugh’s oeuvre is Brideshead Revisited.

Sadly, the novel is familiar to many only from the 1981 TV adaptation, which turned it – at the height of Thatcher’s early triumphalism – into a dreadful yuppy fantasy for aristocracy-fanciers. The 2008 film was even worse. It was also adapted for the stage in 2016.

But to my mind, the real Brideshead is only and can only be found in the novel, and it is the Waugh title that I have most reread – despite its faults. The good news is that two-thirds of it is so good that I almost always forget the faults and am always somewhat surprised by them when I return to the novel.

It opens in the closing stages of the war. Captain Charles Ryder, an old thirty-nine, war-weary, disillusioned – in fact, a rather Conradian figure: he might be Waugh’s Charles Marlow, even sharing a name with Conrad’s narrator-hero – is newly arrived at a requisitioned country house in which his battalion will be billeted. He looks down from the hill overlooking the house and sees the splendid vista of the valley in which it stands and suddenly, with a rush of emotion, realises that he is seeing, for the first time in twenty years, the country seat of the Flyte family, once the home of the estranged Lord and Lady Marchmain and their children, Brideshead (Bridey, the eldest son), Julia, Sebastian and Cordelia (the youngest).

As a teenager, newly arrived at Oxford, Ryder falls in love with the debauched, exquisite and aesthete Sebastian, who is busily shocking and outraging the hearties and academic authorities equally. (I use the word love advisedly: the degree to which the novel might be regarded as homo-erotic has long been squabbled over, but nonetheless and whether platonic or not, a love affair of a kind is what it is.)

The novel – at over 320 pages Waugh’s longest by far – is divided into three books and to my mind the first two are peerless; the third, less so.

In the first book, Ryder remembers his Oxford years in the very early-20s, his first encounters with Sebastian Flyte and the early visits he makes to Sebastian’s family home. The description of the first summer Charles and Sebastian spend together at a Brideshead that is deserted – but for staff, of course – his parents and siblings being elsewhere for the summer, is unmatched in anything else that Waugh wrote, I think.

The second book moves on a few years to pick up the story of Charles and Sebastian and the Flyte family post-Oxford and is equally good, although the idyllic, carefree life of the young men in their twenties is over and the tone darkens. I won’t ruin the story with too many spoilers but suffice it to say that in this part of the book Charles is about to experience something he will never forget and arguably never quite come to terms with – what amounts to an expulsion from Eden and the loss of his relationship with Sebastian, with Sebastian’s family and their vast estate in the country.

Each time I read Brideshead Revisited I realise I have recalled it in much simpler terms than it actually exists. For the novel isn’t really about Sebastian; it isn’t even really about Brideshead the house. It is a threnody to a way of life that is about to disappear, swept aside by war and social cataclysm – the life of a particular slice of the landowning aristocracy as conducted between the wars.

Now it might be argued that the degree of sympathy you have for this particular book will depend to some extent on your tolerance for Britain’s fabulously wealthy landowning aristocratic class as it existed between the wars. I think this is undeniable. But Waugh’s triumph, it seems to me, is to take the raw, base materials of social and class history and transmute them into a profoundly imagined and deeply moving work of fiction that at times rivals Proust in its efforts to recapture lost time.

I won’t spoil the third section with too many criticisms because anyone embarking on Brideshead will want to read the whole thing and make their own judgements, but what I will say is this: the third book has a very hefty dose of Catholicism. Waugh was a convert to Catholicism and it informs this particular novel more deeply than any other he wrote. I have read other reviewers who say that it isn’t convincing but I think I disagree. In the social and class context of which Waugh is writing, I think the religious faith – and its consequences – are both plausible and convincing. I don’t pretend to fully understand this aspect of the novel because I am an atheist, but I don’t for a moment doubt the importance Waugh accorded to it as the final pages of Brideshead unfold.

Each reading of Brideshead has convinced me that it is a novel that deepens with familiarity. Its flaws don’t disappear but nor do they become more exaggerated. It remains the single most beautiful novel that Waugh wrote, I think, and without doubt it contains some of his finest prose and the most powerfully imagined world he was to achieve in his work. I think I might even go as far as to say that in it we see Waugh achieve something that few can do: he makes it possible for us to be moved by – and care about – characters whose class and attitudes make them otherwise repellent. Which, come to think of it, might also apply to Waugh himself. Anyway, right or wrong, guilty pleasure or not, yet again I enjoyed every moment of this novel.

I Hate Everything About You – Except Your Writing...