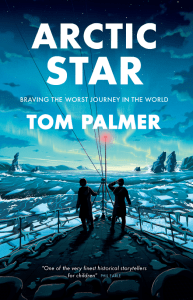 I think Tom Palmer is just getting better and better. I loved his books uncovering hidden stories of war – Armistice Runner and After the War: from Auschwitz to Ambleside – but with his new tale of bravery in the sea battles of World War Two he has produced something very special.

Arctic Star is an exciting and emotional story that takes us into the unimaginably cold seas of the Arctic as convoys of ships try and keep open vital supply lifelines during the Second World War.

Three boyhood friends, Frank, Joseph and Stephen, find themselves on HMS Forgetmenot heading for the Russian port of Murmansk. As they joke with each other, share memories and fears, the boys are given the incredibly dangerous job of clearing ice from the ship’s deck as the sea water freezes on the tons of floating metal. You’ll need to hold your breath when one of them slips overboard and is plucked from the waves just in time before he’s dragged down and frozen to death.

After dodging a torpedo from the ever threatening German U-Boats prowling in packs waiting for their prey, the ship docks in Russia. However, the streets of Murmansk are not as friendly as they hoped and Joseph’s idealised view of post-revolutionary life in Russia get tested to the extreme. His disappointment finds expression in a falling out between the friends and when, on the journey back to the UK, the ship is attacked and fatally torpedoed the boys have to confront the brutal tragedies that war brings with it.

I don’t want to give away any spoilers about the plot and so I’m not going to describe in any detail what happens. But what follows is a touching and rather beautifully written story about friendship and bravery, untimely death and the people left behind – the kind that can, sadly, always be discovered in the stories of war.

Palmer continues the story with two of the friends recruited to the much bigger battleship, HMS Belfast which goes on to take a central role in the battle to sink the formidable German warship, Scharnhorst. And, as has become customary in Palmer’s books, at the end there is plenty of real historical information about the conflict he’s writing about. But, actually, it’s not the real ife story of the sinking of Scharnhorst that’s the central interest of this book, it’s the relationship of the three brave, fictitious young men whose lives represent all those who served so bravely in almost inhuman conditions of the Arctic Ocean. It took some time for their sacrifice to be formally recognised but recognition finally came with the award of the Arctic Star to those who braved those icy, treacherous conditions to help win the war against fascism.

The book is published by Barrington Stoke in their Conkers series.