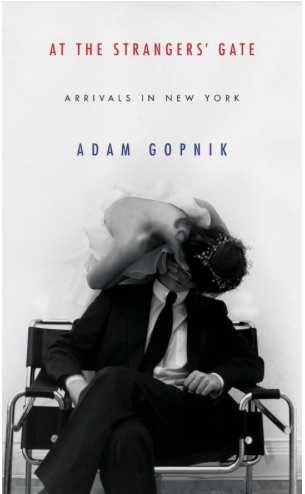 At the Strangers’ Gate by Adam Gopnik

The New Yorker writer Adam Gopnik really does seem to have led a charmed life. At the Strangers’ Gate, his seventh or eighth book, is a memoir about his early years in New York.

Arriving in New York from Montreal in the early-1980s he and his new wife set about making a home for themselves in the city of their dreams. That they had to do this from a nine-by-eleven foot cockroach infested basement apartment scarcely dented their rapturous love affair with New York city and each other.

Very soon, Gopnik was studying art history while also delivering lunchtime lectures for visitors to the Frick, MOMA and other galleries. This was casual work of a kind but it paid, and quite well: this, after all, was a time before internships, he notes, when major institutions might expect young people to work for very little, but would have been appalled had anyone suggested they work for nothing at all. Martha, his effortlessly chic and beautiful wife, is soon working for the great documentary film-maker DA Pennebaker, who has thousands of hours of archive footage that needs editing.

Money is tight but young love and a sense of destiny will get you through. Gopnik begins to write bits and pieces for The New Yorker but then lands his first proper job at GQ magazine, where he is men’s grooming editor. Predictably, he has a lot of fun with this, deconstructing the ‘craft’ of men’s grooming and fashion editing in his usual epigrammatic but garrulous prose. If there is a clever aphorism to be had, rest assured that Gopnik will have it – and not once. Each bon mot is held aloft and turned to catch the light, once, twice, three times, each variant a little more sophisticated than the last. (He even explains that this is what he does.)

During this period, the couple are adopted by Richard Avedon, the fashion and documentary photographer. Avedon died a few years ago and is now a somewhat neglected figure, but for three or four decades he was seen as being amongst the most important photographers. His commercial work revolutionised fashion photography, while his austere, minimalist but monumental portraits – he photographed celebrities and society figures, and then a huge series of outsiders and drifters from the margins of American life – created an entire aesthetic. On Saturday mornings, after breakfast at Avedon’s five-storey townhouse they would wander the Manhattan streets for hours, visiting downtown artists in their studios, or going on museum-crawls to see ‘nothing but masterpieces’. Dinners and weekend house parties at Avedon’s place in the Hamptons followed.

To read Gopnik is to witness the fullest flowering of a certain kind of high-bourgeois life amongst the New York intelligentsia. In many respects, Gopnik is New York – he even seems to believe this himself – and what he does brilliantly is to weave his own personal history into the gradual social and cultural evolution of the city. There is always a bigger picture, a deeper and more informed context – admittedly, one in which he himself is always centre-stage, but once you realise that this is part of the deal, you learn to accept it. And no one writes quite so wonderfully of New York and of the pleasures it affords a certain well-off intellectual class of insiders. To complain that such writing isn’t ‘inclusive’ or caters only for ‘elites’ is to miss the point so widely that there seems little point in trying to explain the error the reader has made.

Gopnik’s various memoirs are certainly his most revealing books but they aren’t necessarily his best. This volume offers a particular kind of vicarious pleasure but for focus and discipline and sheer sustained intelligence it isn’t a patch on what I think may well be his best work – the essays collected in the earlier Through the Children’s Gate (reviewed on Letterpress HERE). This recounts the Gopniks’ return to New York in 2000 after a decade spent living in France, where Gopnik was Paris correspondent for The New Yorker. Now with a young family, they are building a new and dramatically different version of their gilded life in Manhattan when 9/11 happens.

While Through the Children’s Gate does share some of the weaknesses of this later memoir, its emotional heft and its grieving intelligence far outweigh its faults. It may even have what Joseph Mitchell, the great chronicler of old New York, told Gopnik he had always personally striven for in his writing: ‘wild exactitude’. For of course Gopnik knew this legendary figure. ‘Joe’ still maintained a tiny office at The New Yorker but the characters and places and ambience of old New York were long gone and he had fallen silent. He hadn’t run out of sentences, he once explained to Gopnik over lunch in a downtown diner; rather, ‘his sentences had run away from him’.

It seems inconceivable that anything similar will ever happen to Adam Gopnik. The years may have spun past like the whirling calendar leaves in a 40s musical but it doesn’t matter. For in that very New York sense, he has made it. The life he dreamt of is his. He is a master of the universe.