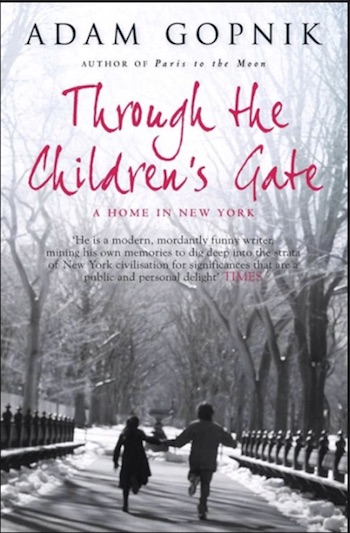 Through the Children’s Gate by Adam Gopnik

I suspect that there has always been something about Adam Gopnik, The New Yorker essayist, that has rubbed people up the wrong way. For example, a critic called James Wolcott once began a piece about Gopnik in the following way: “I wonder if Adam Gopnik was put on this earth to annoy. If so, mission accomplished.” Even a piece in The Guardian in 2017 by Hadley Freeman, who is clearly well-disposed towards Gopnik, managed to make him sound like a self-satisfied name-dropping elitist.

I can’t quite decide but have been rereading his collection of essays, Through the Children’s Gate, to try and find out.

I am not a part of The New Yorker magazine’s natural demographic, I don’t think. Its upper-crust New York intelligentsia image, the over-ornate, deco-ish font it still sets titles in, the top hatted dandy that for decades was synonymous with the magazine – it all has a rather fusty, smug air about it. And like Punch, its humour has a self-congratulatory facetious tone that is simultaneously irritating and unfunny. I find myself condemning many writers overly identified with The New Yorker – guilty by contagion – who in other circumstances I would probably admire.

Anyway, Adam Gopnik is – of course – a brilliantly cultured and cultivated prose stylist, a public intellectual, a memoirist, essayist, critic and, I suppose, almost the definition of that now forgotten genre, belles-lettres. He writes beautifully and can spin an essay out of almost anything – and the more apparently unconnected the ideas he brings together in a piece, the more surprised you find yourself being at his elegant and convincing conclusions. His essays first and foremost are written to give pleasure.

His primary subject matter is really a special kind of haute-bourgeois New York life. Gently self-ridiculing, gently chiding of a class and type, ironic, quietly amused, wry and elegantly thoughtful, he may not have invented what might be called the warm-funny-clever-New-Yorker-school-of-humanism style, but that he is one of its most sophisticated practitioners is beyond dispute.

The pieces in Through the Children’s Gate are linked – and given added depth and emotional heft – by several themes that weave through them: the return of Gopnik and his wife and young children to New York in 2000 after five years spent living in Paris; the making of a new life under new conditions (no longer New York’s driven, downtown arts and party scene, but midtown parents desperately seeking affordable family housing, ideally overlooking Central Park); and most of all, the 9/11 attacks that changed everything.

There are some marvellous set pieces. An account of his psychoanalysis, which is both extremely funny and self-deprecating; the family’s first post-Paris Thanksgiving; the time he was talked into being a Purimspieler, a sort of MC at an event celebrating the Jewish holiday of Purim; contemporary house-hunting seen through the lens of William Dean Howells’ long-forgotten 1889 novel, A Hazard of New Fortunes (forgotten by everyone except Gopnik, that is, and it turns out to be a brilliant piece); and in passing, a lovely piece about the making of Bill Evans’ classic trio recording from the Village Vanguard on Sunday 25th June 1961.

But perhaps the most touching piece and the funniest – and the most New York – is about his daughter Olivia’s imaginary friend, Charlie Ravioli. Charlie is so busy that he can never play with her; indeed, much of the time he is too busy to be able to take her imaginary phone calls. Eventually – once he begins working in TV – he is so busy that he has to have an imaginary assistant to field his calls. Gopnik asks his sister, a professor of developmental psychology, whether this can be considered normal. It isn’t in the literature, his sister tells him. Yes, but is it, you know, normal for New York, Gopnik asks. It isn’t even normal for California, she tells him: “You should move.”

I think it might be easy to overdose on Gopnik’s particular take on New York life, but for the moment I am thoroughly enjoying rereading these pieces from the early 2000s. They’re modern, funny, whip-smart, beautifully written, elegantly conceived and for the most part have an effortless charm about them. Yes, of course he has a very nice life, an enviable life, and of course he represents a class and type – the metropolitan liberal intelligentsia – now in Trump’s America more deeply reviled than at any time in recent history.

And in a sense that’s why the pieces are important – their humanity, their liberal values, their cultured understanding, their deep hinterland of literature and the arts, their lightly-worn wisdom. The fact that they also give such great pleasure is an added bonus and I shall certainly read more.