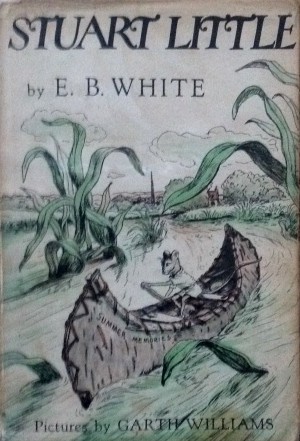 I’m pretty sure that the key to writing a classic children’s book is to not apologise or explain. Magic wardrobes, Middle Earth, talking pigs, a bear in a checked scarf – the confident writer knows that we'll accept that they just exist as surely as the ‘real’ world exists and so let’s just get on with the story. E.B. White’s contribution to the classic children’s story abides by this iron law of storytelling – Mr and Mrs White are expecting a child, it turns out to be a mouse; they accept it, we accept it and his name is Stuart. Stuart lives his life as a talking mouse in the world of human adults and that’s just the reality. We don’t get any explanation  of this state of affairs and, importantly, no-one seems to see it as a problem to be solved.

In fact, Stuart is a can-do sort of fellow and we know from the outset that there’s going to be plenty of adventures for him to have in the outside world. In many ways White constructs a sort of picaresque novel in which Stuart will go on a journey, encountering different types of people and gather experience and wisdom as he goes along. As with all picaresque novels, the action tends to be episodic. So we start off by seeing Stuart’s home life and how the family adapts to his unique characteristics but we also see the jeopardy that may await him in form of the house cat, Snowbell. The cat is constrained from attacking Stuart as all his instincts demand because of his loyalty to the family he lives with – after all Stuart, although mouse-like, is a member of the family.

However, Snowbell doesn’t extend this self-restraint towards Margalo, a small bird that Stuart befriends after finding the poor creature half-frozen to death on the doorstep. Eventually Snowbell conspires with his other feline friends to cook up a plot for the disposal of Margalo and this prompts the bird to fly off and continue its migration north.

This marks the end of Stuart’s time at home and he also resolves to strike off north in order to find his friend again. Along the way he’ll have adventures in a car given to him by a friendly dentist, he will become an anarchic substitute teacher and will meet another young girl, Harriet Ames, as small as he is but in entirely human form. Stuart tries hard to impress her and invites her to spend the afternoon with him boating on the river in his newly acquired toy canoe. But it ends disastrously, Harriet spurns him and the book ends with Stuart resolving to continue his journey north in search of Margalo.

White is, of course, a superbly skilled and confident writer and I expect that there wouldn’t be many younger readers who would think there was anything odd about Stuart’s exciting adventures – they would happily accept his unlikely mousiness.

The fact that Stuart may look different but is, to all intents and purposes, a human child in terms of his character, his aspirations and his emotions is almost certainly the key to its popularity with younger readers. Stuart plays out a sort of wish fulfilment fantasy that children can embrace with no real risk or jeopardy.

The book is illustrated by Garth Williams who went on to become an award winning artist in his own right and the illustrations here really add an extra charm to the tale.

I haven’t seen the films that have been made based on the book but I find it hard to imagine how it would work nearly as well as it does in book form where it’s your own imagination that constructs the logic that enables Stuart and his world to exist.

Paperback and hardback copies are plentiful and can be found for a range of costs – anything from a few pence to a first edition for £3-£4,000.