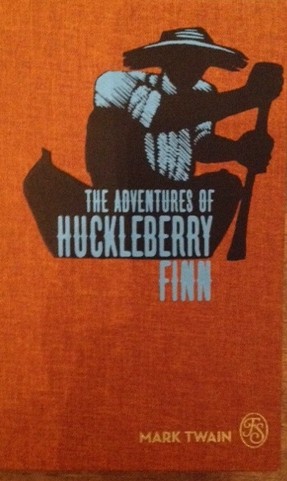 The Adventures of Huckleberry Finn by Mark Twain

“All modern American literature comes from one book by Mark Twain called ‘Huckleberry Finn’. It’s the best book we’ve had. All American writing comes from that. There was nothing before. There has been nothing as good since.”

“The book was so up-to-date!” I was not reading a classic author so much as looking at a new work sent to me in galleys by a publisher. It was as if it had arrived with one of those rare letters which says, ‘We won’t make this claim often but do think we have an extraordinary first novel to send out.’ So it was like reading ‘From Here to Eternity’ in galleys, back in 1950, or ‘Lie Down in Darkness,’ ‘Catch-22,’ or ‘The World According to Garp.’”

I’ve used these remarkable quotations from two giants of twentieth century American literature to emphasise just how iconic and legendary this book has become. The notion that Twain in some way invented modern American literature when this book was published in 1855 is one that is regularly repeated – and I have a suspicion that there are some who hold this view who may not even have read it; much in the way that the British public hold the view that Dickens is literary giant and have never read anything much more than a Bowderalised version of Oliver Twist or A Christmas Carol.

Inevitably I suppose, Huckleberry Finn will be less resonant with British readers and I grew up thinking of it as a children’s book – and you’ll still find it referred to and classified as a children’s classic. But, having finally got around to reading the full, unabridged version, it’s clearly a book that has one foot in the ‘young adult’ market and the other firmly in the adult camp – a universal audience in terms of age but one which will be predominately male. Twain is unerring in his ability to get into the sensibility of his male characters but women get pretty short shrift in this world.

Without going through the tedious process of summarising the plot, the key to the success of the novel is that it puts a young boy with a rebellious spirit seeking to keep his body and soul free of the stifling conventions of society on a raft with Jim, a black slave making his own bid for freedom, and floats them down the iconic Mississippi river.

The two of them somehow embody the underlying spirit of the emerging and evolving USA while at the same time celebrating its traditions and its awe-inspiring nature, flora and fauna. Never was the symbolism of a river journey more effectively and engagingly used.

Robert McCrum writing for The Guardian in 2014 captures the mystique of the book perfectly:

“The voice of a new America resounds loud and clear from the first page to the last. Huckleberry Finn, inspired by a prequel (The Adventures of Tom Sawyer) that was for boys, is a book that celebrates the lost world of childhood, the space and mystery of the midwest. Above all, it mythologises the issue – race – that had tormented the Union for so many decades. So Huck Finn floats down the great river that flows through the heart of America, and on this adventure he is accompanied by the magnificent figure of Jim, a runaway slave, who is also making his bid for freedom.”

In recent years the praise for Twain’s masterpiece has been somewhat diluted by readers who have found some of the language used by Twain uncomfortable and offensive to modern sensibilities – especially the liberal use of the word “n*****” to describe Jim – and there have been frequent calls to ban the book from schools and libraries in the US. I can entirely understand how the seemingly constant use of this word would – and should – be unacceptable when it is used knowingly and mischievously to underscore an essentially racist world view but I don’t believe that to be the case here. Twain’s use of that word reflects and is entirely in and of the circumstances and attitudes of the time and place in which the action takes place – it’s not possible to deny the ubiquity with which the word was used at this time in this place and it serves, if anything, to provide a way in to exploring the power of this kind of language with younger readers and to help the understand why it is now such a toxic issue.

The Adventures of Huckleberry Finn will never have the same resonance for a British audience that it has for an American one. I can intellectually grasp its power and significance but I don’t think I will ever be able to feel it in the way Hemingway or Mailer experienced it.

Plenty of cheap copies in either hard or paperback are available if you want to read this classic.