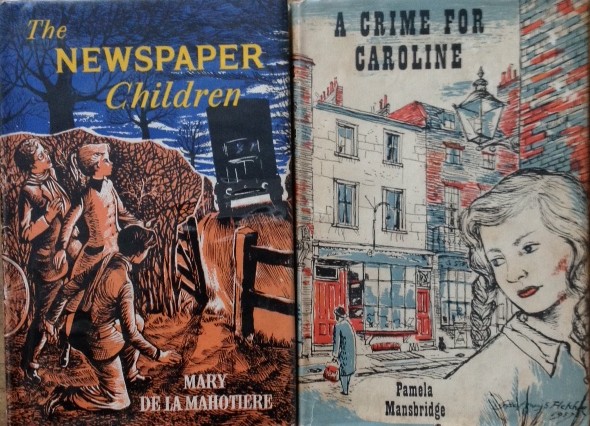 Book Jackets From The Letterpress Bookshelves

In this article we’ll be sharing the book jacket artwork created for two children’s books that we’ve collected over the years. Both are hardcover, one published by Dent and one by Butterworth. One was released in 1958 and the other in 1959 and both capture something of the era in which they were released.

The book jacket blurb tells us:

“Sammy, Roberta and Billy deliver newspapers every morning, and so meet Hefty Hill, a nice but rheumaticky old nurseryman. Two crooked characters called Sid and Archie have set up in opposition to him, and even worse is intended, the children suspect.

They join battle with all their might, their lives a whirl of newspapers, bicycles, cauliflowers, markets, clues, turkeys and greenhouses. A most amusing and original thriller, in which shopkeeping is found to be harder than it looks.”

The artwork is the work of Michael Manning who is clearly credited on the inside but that’s where my trail goes cold because I just can’t dig up any more information on Manning, either from the internet or the children’s book illustration reference texts we have here. So I have no biographical information to give you.

However, the use of colour here is really eye-catching and there are distinct reflections of the work of Bawden or Minton and in the styalisation of the truck I see an echo of the cartoon work of the Disney studios in their animation of 101 Dalmatians.

Without knowing the publication date I think the children’s clothes would give you a pretty good clue about when this was drawn –especially the girls coat which would have been a very fashionable at the time the book came out.

The book sold for 8/6 (eight shillings and six pence) – not cheap for that time.

A Crime For Caroline by Pamela Mansbridge (Dent)

From the book jacket we learn:

“The three children of Chief Engineer Lester live with their mother near the hamlet of Tedham Green, while their father is at sea. It looks very black for Robin, aged eleven, the youngest of the Lesters, when it is revealed that the brooch he has bought for his mother’s birthday present ‘at a bargain price’, is stolen property.”

“Illustrator, especially for the Daily Telegraph, and writer.
Born in Bolton, Lancashire; studied at the Bolton School of Art and in 1945 at the Slade School of Fine Art, University College and also at the Bartlett School of Architecture. His drawings were published in the Manchester Guardian and from 1958 in the Daily Telegraph, where for 30 years he illustrated its diary column. He was the illustrator of some 20 books, many on London, including 'The London Nobody Knows', 1962; 'The Elements of Sketching', 1966; 'Italian Impressions', 1974; and 'London - a private view', 1990. He lived in London and retired to Bolton, Lancs.
In 2005 a posthumous exhibition 'Geoffrey Fletcher's City Sights' was organised by the Guildhall Art Gallery.”

Fletcher's own books date from the early Sixties and so, given the date of A Crime for Caroline, this would be one of Fletcher’s earlier commissions. The colours here make quite a contrast with those of Michael Manning that are described above – here it’s all about delicacy, space and lightness of touch.

The book is priced at 11/6 (eleven shillings and sixpence) – an expensive luxuary.

Two very different jackets in perfect condition that have survived completely intact for 70 years and continue to give so much pleasure. 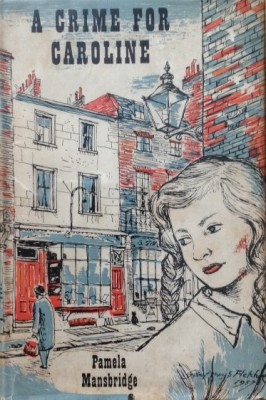 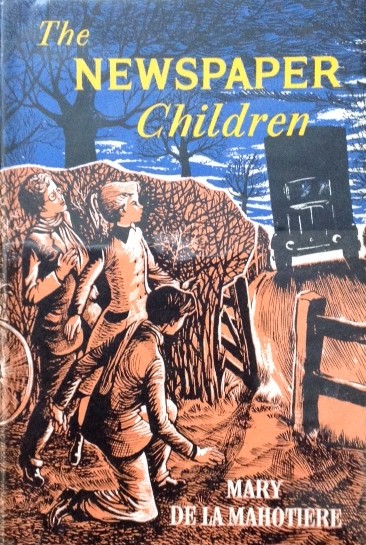