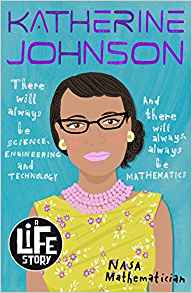 Let me set the scene:

Afternoon and into the small hours of 25th July

I’m 15 years old, sat on the hearthrug in the living room and I’m transfixed by a small black and white television screen housed in an enormous brown wooden box as pictures of variable quality tell of the greatest scientific adventure of the age – the first moon landing by Apollo 11.

This is big. I know it’s big. But honestly, I don’t have any real concept of just how big. We are all granted the occasional moment when we realise that we are living through history and this was one such instant for me. But it’s also a moment about which, as I contemplate it in retrospect, I now realise I knew virtually nothing.

I certainly didn’t know much of the huge story Leila Rasheed tells in this biography of the black mathematician, Katherine Johnson. This isn’t so much a single book – it’s more a small library crushed down to its essences and distilled between two card covers. What we get here isn’t just the life story of a remarkable woman; it’s also the story of slavery, racial segregation in the US, gender equality politics, a history of the space race, the Cold War, science and technology and a modern update on the future of humanity in space. Phew!

Katherine Johnson’s single-minded and resilient battle to overcome social prejudice at all levels and to become one of the most significant figures in NASA’s efforts to emerge as the pre-eminent space power is a truly remarkable one and has been celebrated in the 2016 film Hidden Figures. But Rasheed isn’t just serving up another panegyric about Johnson, however merited that most certainly is; what she wants us to see is that this woman fits into a social milieu which makes her achievements so much more extraordinary and so much more significant.

There is a danger that biographies of famous people written for younger readers locates the subject as the central or the only significant player in what is a massively complex story. This book avoids that error by refusing to compromise on the multi-layered nature of the narrative. This not only makes for a fuller more satisfying story, it hints at the way in which the author must have engaged in a vast amount of background research and reading in order to synthesize such a vast array of historical material. It’s a truly astronomical undertaking in its own right and done with deceptive ease.

The layout of the book also helps to keep the historical narrative fresh and alive. Panels of bite-sized information and personal profiles of key personnel are liberally scattered through the text alongside illustrations and aphorisms. At the end of the book the reader gets timelines, a playlist of records appropriate to the era, a glossary and an index of key issues and this is all stuff that makes the book feel so much bigger than it actually is.

The book is one of a series – Stephen Hawkings was released at the same time and there will doubtless be others in the pipeline. At just £5.99 it is an absolute snip – go and get yourself a copy or buy one for a teenager you know..