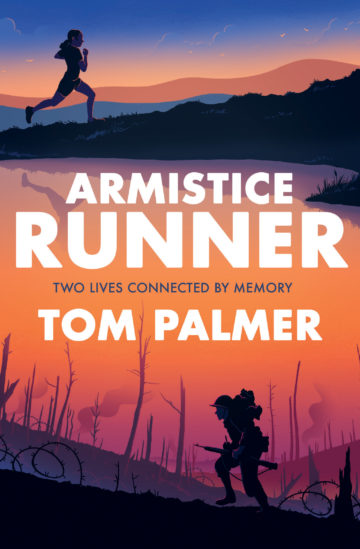 When I picked up this latest Barrington Stoke publication in their Conkers series I have to admit I was a bit worried that it might be one I’d struggle with. Tom Palmer’s book pays a tribute to fell runners from the past and present and I have to confess that I just don’t understand the urge to run – I’ve never had it, never will and I can’t see why anyone else wants to put themselves through pain on a voluntary basis. But actually, I needn’t have worried because the story is an engaging, exciting and emotionally intense one that will appeal to anyone who enjoys reading about family relationships and how we’re all tied to the history of our ancestors.

Lily is a young fell runner who is struggling a bit with her chosen sport – somehow she’s never quite able to hang on to win her races these days. There’s a girl called Abbie with a very determined father who seems to keep pipping her at the post. But that’s not her only problem because her beloved Gran has just been diagnosed with Alzheimer’s Disease and her granddad is struggling to cope. Understandably, it’s upset the whole family and Lily and her younger brother don’t know quite what to expect when they pay gran and granddad a visit.

At first Lily fears the worst because Gran seems so withdrawn and vulnerable but when Lily mentions she is a runner, her Gran comes to life. It seems that Lily’s great-great Grandfather was also a medal-winning fell runner who suddenly stopped competing after the First World War. Gran has a box of his belongings in the loft that she insists Lily should have – and this begins a momentous journey into history for Lily. In the box she finds great-great granddad, Ernest’s running log and diary and Lily discovers it tells the story of Ernest’s time fighting in the First World War, his determination to revenge the death of his brother and his career as a runner taking messages between the trenches.

But it’s also a story that explores the way friendships are made and, crucially for Lily, a story of how those friendships can be made between people who seem to be natural enemies.

When Gran disappears from the house one day and goes missing on the fells, Lily has to do whatever she can to find her – but she discovers she’s not alone because her nemesis, Abbie, is also there in her time of need…

At almost 200 pages, this is one of Barrington Stoke’s longer publications – they’ve guided it for a reading age of 8+ - but I really don’t think the length will be a problem for younger readers because the story is so immersive and well plotted that I’m sure readers will go with it in the same way as I did.

The Conkers series emphasises great book design, illustration and high quality writing and this book certainly ticks those boxes. The illustrations that run (literally and figuratively) through the book have been provided by Tom Clohesy Cole and the cover of the book is a knockout.

Tom Palmer also provides a few pages at the end that give useful information on the First World War and the Armistice as well as the ten things that inspired him to write this book.

Published on 6th September you can order the book from your local independent bookstore or from Barrington Stoke’s own website.