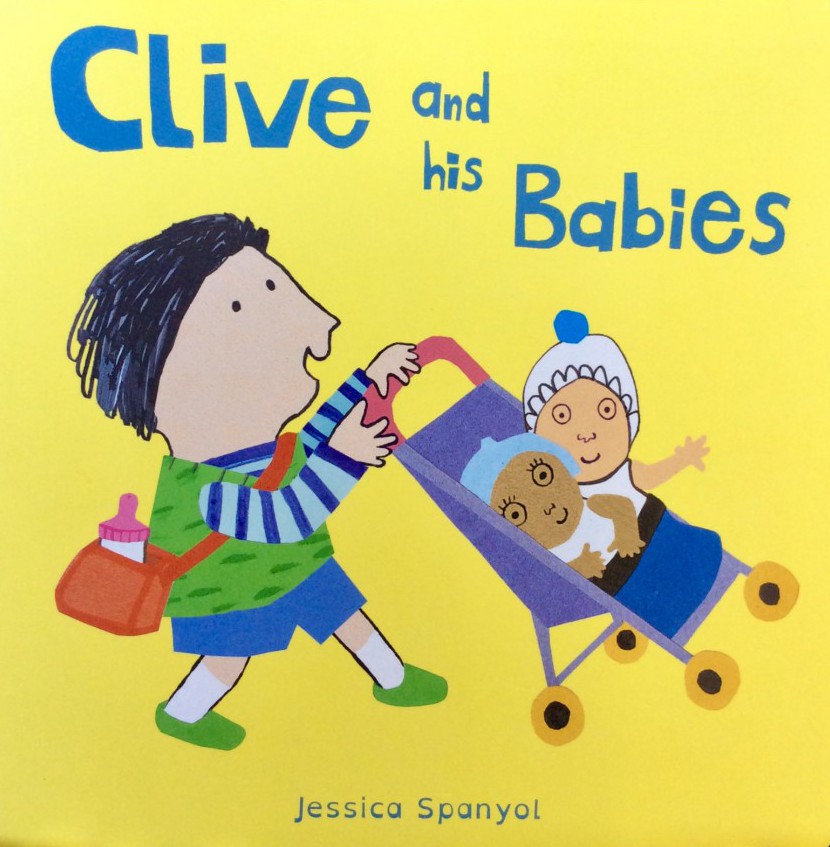 Clive and his Babies by Jessica Spanyol

I am very fond of Clive, a gentle, sensitive, imaginative little boy who has now starred in several picture board books published by Child’s Play ( International) Limited.

Clive loves playing with his dolls as we can see from the front cover with him confidently pushing them along in a pushchair. They face out at the reader, smiling and waving and continue to stare at us throughout the story. There is no need for any help from adults as Clive is well equipped with a bag that has a bottle peeping out. I like the way that the title and the story frames them as his ‘babies’ rather than ‘dolls’ because this gives the powerful message that his imagination is important. They all have a great time together playing on the slide with him in charge and then it’s time to give them some milk. The bottle remains on the floor as he is shown on a chair possibly breast feeding one of them (but maybe just holding him?). I don’t think that this has ever been depicted in a picture book before!

Clive goes on to care for them and has lots more fun with the help of his friends Mina, Asif, Jeffrey and Moshi Cat. He even gives his babies a ride on his trike , taking care to wear his safety helmet of course. As all good parents do, he reads them a story before tucking them into their box which serves as a bed. But then, once changed into his pink pyjamas, he decides to let the cat curl up in the box and, because he loves them so much, the final page shows him cuddling them in his own bed under a brightly coloured patch work cover. I looked at the book with my three and a half year old granddaughter who pointed out that, because he is a real boy we can see that his eyes are closed but the babies are just dolls so they keep their fixed open eyes - what a perceptive child!

Jessica Spanyol has a distinctive illustrative style that uses a soft colour palette. Despite this , the colours are dense enough to be seen from a distance, which is important if reading to a group of children. Each image has broad blocks of colour set against a different paler background colour which also helps with definition.

So why don’t we see more picture books that challenge gender stereotypes? As my elderly mother recently said to me, ‘Girls and boys are naturally drawn to different toys so why be surprised?’ This is a common point of view but well-designed books like this play an important part in defying this perception and shaping different behaviour and attitudes. I really hope that more are produced that show boys who are role playing as caring, actively involved parents. The more that are published and made available in bookshops the greater the chances that they will be then used more widely by practitioners and parents. I suspect that it will take a long time to convince some people but I know from personal experience that my two year old grandson loves playing with his baby doll and pushchair. He will definitely be delighted to see this charming book which is all about another boy just like him.