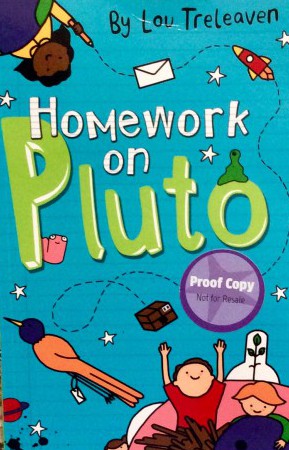 Homework on Pluto by Lou Treleavan

This is the second very entertaining little book about the space adventures of Jon. This time he is spending a holiday on Pluto with his family as a reward for saving that planet from destruction. The snag is that has to keep in regular touch with his teacher, Mrs Hall who is determined that he isn’t going to fall behind with his homework.

At first Jon seems to be a child who likes to please and be co-operative and so the relationship between him and his teacher is a friendly one. He responds to her sometimes curt letters with some delightful descriptive illustrated writing that paints a picture of his new friends and the strange and wonderful food that they eat. But Mrs Hall is an old fashioned teacher who doesn’t seem to value this kind of writing at all and would much prefer an essay on Pluto’s geography. He dutifully writes a very detailed essay which is reproduced in the book so that we can see that he gets several ticks and a final grudging compliment:

‘Interesting Jon! Remember that you are the President’s guest so try to be polite’.

The next piece of homework requires him to describe jobs on Pluto which gives Jon a chance to tell his classmates more about the very different requirements of living on Pluto. In this way we learn about the need for Gravity Guys who make sure that no one floats away and Friendly Folk who are employed to help people and make sure that no one is lonely (what a lovely idea that is!). Despite all this, Mrs Hall’s demands become more insistent, including making him the very reluctant poster boy for a nationwide ‘Bring Back Handwriting’ campaign.

He writes another detailed essay entitled ‘The weird and wonderful wildlife of Pluto’ and rather cheekily includes his big brother which Mrs Hall annotates with the comment ‘not really an animal. (Or is he? Check)’.

As the story progresses Jon emerges as imaginative and creative as he interprets his teacher’s demands to suit his own agenda. Part of the problem is that life on Pluto is very eventful so he really needs to focus on his new interests that include Snargle spotting and thwarting the blue-headed skwitches who keep trying to steal his Gran’s handbag and eventually fly off with his little sister.

Eventually they take him as well and he learns about their plight which means that he has to think about how he can help them survive and flourish. By the way, his energetic and unconventional Gran is having plenty of dangerous adventures of her own which include ‘wowing people with her somersaults at low gravity parties’.

The lively illustrations provide a fun and accessible format and definitely add to this funny story which reveals Jon to be quite subversive despite his excellent homework. I like the way that he manages to come out on top and that Mrs Hall doesn’t spot that she is being fobbed off. In this way it continues the great tradition of children’s books that show children to be much wiser and more imaginative that the adults around them. I also think that the story would inspire some wonderful discussion, writing and other creative work on the theme of space and importance of caring for the environment and the community, no matter where one is in the solar system.

I very much look forward to reading the next book in the series.