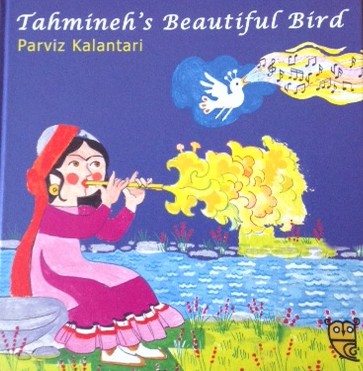 One of the magical things that children’s picture books can do is to introduce younger readers to diverse cultures in a non-colonial, unpatronising way that gives them a sense of the richness of other people’s lives. Of course for that to happen however there need to be publishers prepared to go out and find the best writers and artists, translate their work and take a chance on making it available to booksellers. I know that this is an uphill struggle – there’s an inherent conservatism in the book industry at all stages and it’s probably true to say that there’s also a pretty conservative book-buying audience, depressingly enough in libraries and schools too. So publishers like Tiny Owl who make books like this available should not just be praised but positively nurtured. Here we have a very simple, colourfully illustrated tale from Parvis Kalantari, an Iranian artist, writer and illustrator who is prominent and popular in his own country but is probably unknown to most British readers. The very useful profile of the artist at the end of the book ( these little pen-portraits are great!) tells us that:

Parvis Kalantari’s paintings focus on the everyday life of nomadic tribes, desert people, and those living by the sea. He achieves a distinctive artistic anthropology in his work, even using cobb ( a building material made of clay, water and straw) in some of his pictures…. 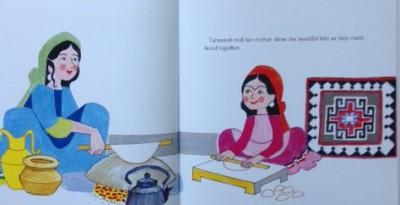 What seem at first glance to be very basic, even naïve drawings are beautifully judged and the way the pictures often spread themselves right across two open pages helps to draw you in to the fairy tale.

Tahmineh is a young girl who is captivated one day by the entrancing song of a magical bird. She can’t forget the birdsong because it was so beautiful and she can’t concentrate on anything else. Because she can’t have the bird to listen to every day she decides to capture the memory of the song in a picture she weaves on a carpet-bag or chanteh. She enters her bag in competition at the carpet fair the family travel to at the end of the summer and as the judges view the bag, the bird she has woven breaks free and starts singing. The judges are enraptured and award Tahmineh first prize. Captured in this little tale is something of the spirit of the Qashqai, a nomadic tribespeople who move around Iran with their sheep and live in tent homes. Again the book gives us this information at the end so that we can understand the cultural context of the story.

Published originally in 2012 but translated in 2015 by Azita Rassi for Tiny Owl, go to the publishers website to order a copy because you might struggle to find it in the local bookshop.