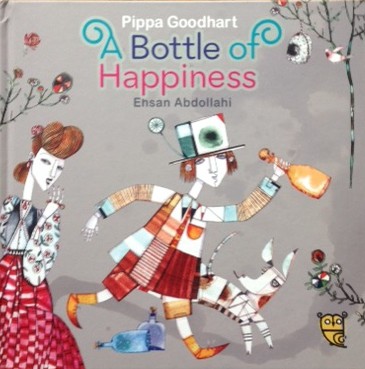 A Bottle of Happiness by Pippa Goodhart illustrated by Ehsan Abdollahi

How can you measure the value of happiness? Pippa Goodhart’s fable invites children to consider whether material wealth is always the best thing to be chasing after or whether being rich in happiness and community spirit can be more fulfilling.

On either side of a high mountain live two separate communities – one that is rich in resources that provide them with plenty of beautiful things to sell to each other and, over the mountain, a community that’s much poorer but love to share things and tell each other stories One day young Pim and his dog decide to seek out new stories and plan a visit from the poor side of the mountain to the rich side. When he arrives he’s amazed at the wonderful fruits on sale in the rich market but he has nothing to trade for them. He offers to bring back a bottle of happiness to pay for the fruit but when he comes back the crowd laugh at him because his bottle is empty when he takes the top off – or so everyone thinks until they find themselves overcome with the desire to laugh and share…… 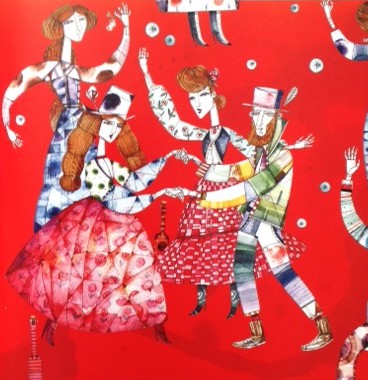 This lovely fable is illustrated by the excellent Iranian artist, Ehsan Abdollahi who recently hit the headlines for all the wrong reasons when a piece of bull-headed bureaucracy on behalf of the Home Office led to him being denied a visa to attend this year’s Edinburgh literary festival. Thanks to pressure from his publisher, Tiny Owl, and a twitterstorm of outrage from the book community, the right decision to allow him into the country was eventually reached – although the episode remains a farcical episode that would be funny if it wasn’t so serious.

Abdollahi, who teaches illustration at university in Iran, works in watercolour and the short profile of him at the end of this book tells us:

The illustrations of A Bottle of Happiness are in watercolour too. Ehsan says when he was working on the book he was living in the south of Iran…and was inspired by the environment, fabric and clothes of the people of that region to use sharp colours and rich patterns in his illustrations.

The result is a series of richly coloured drawings that are reminiscent of patchwork or collage and their seeming simplicity disguises just how subtly they have been constructed.

This story offers lots for children to think about and learn from, illustrated with jazzy patchwork pictures in a style that they might like to try out for themselves. 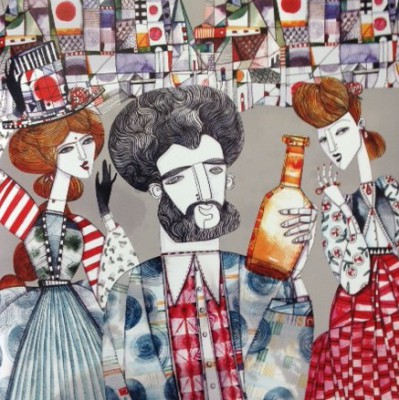 This is a beautiful book with an urgent and necessary message – it would be nice if all the negative publicity generated by the Home Office’s cack-handed handling of the visa resulted in lots more people buying it and having the chance to see what fabulous children’s books are being produced at the moment.