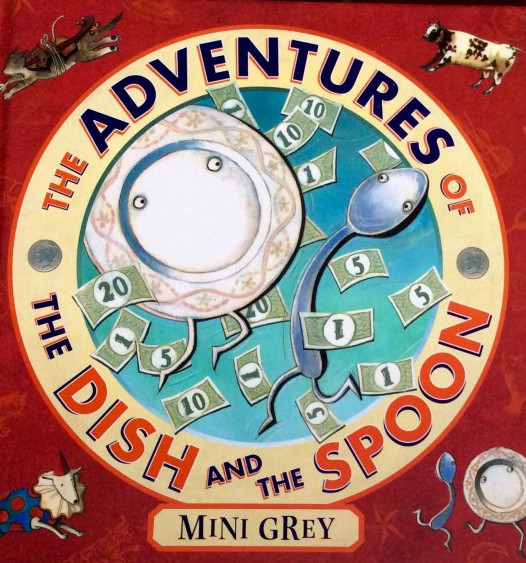 The Adventures of the Dish and the Spoon by Mini Grey

The very talented, prize-winning Mini Grey is an author/ illustrator who admits that she enjoys meandering in a kind of stream of consciousness way as she she plans her many picture books. She has what could be described as a surreal and optimistic approach to the ordinary world where practically anything can happen. She particularly likes giving life to everyday inanimate objects - a style that  demonstrates an extraordinarily vivid imagination. I saw her give an entertaining and energetic presentation about her work at a Guardian conference last year where she showed a photo of herself as a young child in a fancy dress competition dressed as 'Jaws' - exactly the kind of home-made odd ball, original choice of costume that one might expect from her. Her books are structurally pretty complicated in layout but confidently drawn in the way that children will attempt to draw anything and not be fazed by things like scale and perspective. This gives her illustrations a curiously endearing childlike quality.

She has written and illustrated many books including Biscuit Bear; Hermelin the Detective Mouse; Space Dog and the great anti hero Traction Man trilogy. They are all fabulous, but this one is definitely my all time favourite - it is perfectly packed with humour, suspense and pathos from beginning to end. For reasons that will become apparent, I have given it as a twenty fifth wedding present to somewhat surprised friends in the past. Haven't we all wondered what happened to the dish that ran away with the spoon in the well known nursery rhyme ' Hey diddle, diddle'? Well apparently they went off to sea and later became a very successful music hall act. As they became famous, they developed a taste for the luxurious high life depicted very clearly in the central picture and then those smaller ones running from top to bottom here. 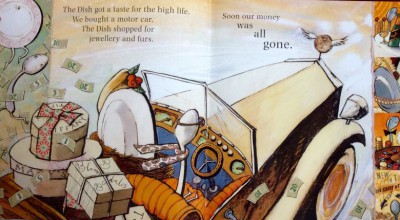 Alas, the good times do not last and they fall in to the shady company of mean looking knives. Their fall from fame and fortune is dramatically conveyed in the illustrations as they take to a desperate life of crime. 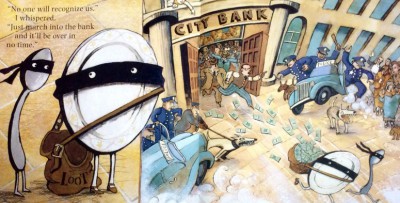 They are incompetent criminals and their somewhat distinctive physical features mean that they are soon caught and he languishes in prison for twenty five years while she is an invalid (as a result of smashing to pieces when trying to make an escape). She is deported far away and he eventually emerges from his long custodial sentence, is also deported and emerges into a strange unfamiliar world. 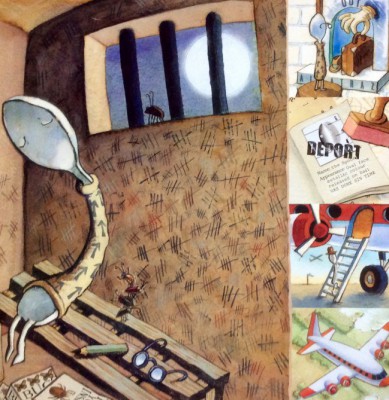 As in the world of people, twenty five years is a very long time to keep a relationship fresh and satisfying. Without spoiling the denouement, all I can  say is that this dish and spoon manage to reconnect in a searingly romantic scene towards the end and begin an exciting new phase of their lives despite all their early troubles.

It is a book with so much interesting and lively detail on every page and it genuinely makes me laugh out loud every time I read it. I hope that you enjoy it too.