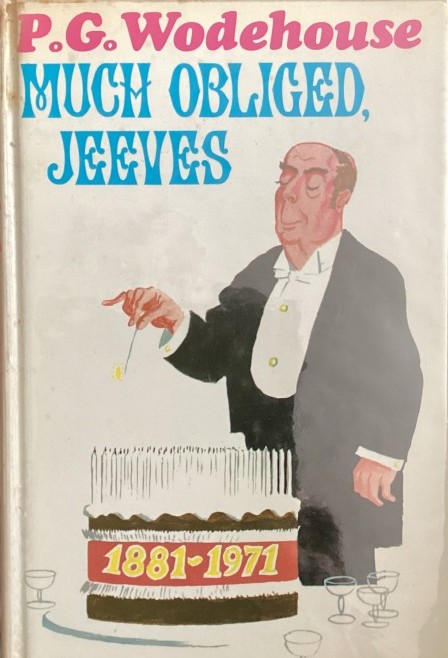 Much Obliged, Jeeves by P.G. Wodehouse

Published in 1971 specifically to celebrate the author’s ninetieth birthday, Much Obliged, Jeeves is a perfect example of the extraordinary world of Jeeves and Wooster that Wodehouse excelled at. You might think that age would have dimmed his eye for the comic situation or his ear for the characteristic dialogue associated with the characters in this fantastical world of dim aristocrats, belligerent industrialists, pushy nouveau riche upstarts and omniscient butlers but you’d be wrong.

As with most of the Jeeves and Wooster stories, plot isn’t really important and doesn’t take centre stage. Bertie Wooster - accompanied as ever by his butler and minder, Jeeves - has been enticed to visit his Aunt Dahlia who is hosting an open house for a motley collection of individuals who are there to plan a strategy for supporting the election campaign of one of Bertie’s old friends, Harold Winship, known to all as Ginger. Ginger, another limp upper class ditherer, has been manipulated into standing for election as a Conservative candidate but the poor sap has no facility or interest in politics - he’s doing it all in pursuit of a beautiful woman with an overbearing personality and a need to only be associated with success.

Needless to say the house party is a mix of people who dislike Bertie or women who might have, at some point, been engaged to him. Wooster’s only desire is to avoid conflict with those seeking to confront him and equally to avoid entanglement with those who might wish to drag him into unwanted matrimonial arrangements. But, above all, he simply wants to do what he can to help Ginger - who is, of course, busily getting himself into emotional deep waters by cheating on his fiancé with his newly appointed secretary.

Ultimately, we all know that the troubles of our man Wooster will only be sorted by the almost deity-like intervention of Jeeves - a man who seems to know everything and everyone worth knowing.

No-one is going to read this book in the hope of finding deep insights or experimentation - quite the opposite. What Wodehouse created with Jeeves and Wooster is a world out of time and place but whole to itself. It’s essentially a world that never existed but always existed and Wooster is the embodiment of our own hapless, lazy desire to avoid responsibility and to do so with two cast-iron guarantees for his well-being: money and Jeeves, the miraculous genii who can be relied on to set everything right however useless Bertie is.

It’s very hard, reading this book in 2022, not to imagine that Britain’s erstwhile Prime Minister, Boris Johnson, believed the Jeeves and Wooster books to be a documentary depiction of real life.

I think the essential difference between Boris Johnson and Bertie Wooster is that Bertie is thoroughly decent and genuinely self-effecting, aware at all times of his limitations without necessarily feeling he has to apologise for them. He never takes Jeeves for granted and theirs is genuinely a partnership to each’s mutual benefit. The books are infused with that sense of good will and mild-mannered bonhomie that makes them perfect escapism. These adventures are comic book stuff and no real-world clouds are allowed to drift for very long across the sky and there are no poisoned waters awaiting the characters or you, the reader.

There’s a bit more character development than Wodehouse is often given credit for and the inconsequential plots are convoluted enough to demand a really skilled hand when it comes to sustaining the illusion of the Wooster world. These are soufflé’s that could so easily collapse under their own weight but for the skill of the chef.

I have to be in the mood for a visit to Wodehouse’s world but when I am in that frame of mind, there’s simply nothing better.

Copies of the book in paper and hardback are easy enough to find online for very little money. Treat yourself.