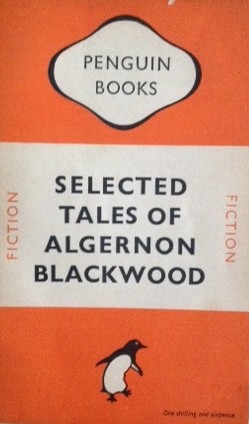 The name of Algernon Blackwood (1869 – 1951) is synonymous with tales of the unexpected, supernatural or ‘weird’. Born and educated in the UK, Blackwood worked as a dairy farmer in Canada before moving to New York where he had an astonishingly varied career - a newspaper reporter in New York City, bartender, model, journalist for The New York Times, private secretary, businessman and violin teacher (Wikipedia). But it was when he moved back to the UK that he found his facility for writing short stories of the supernatural and he expressed his aspirations in this way:

“My fundamental interest, I suppose, is signs and proofs of other powers that lie hidden in us all; the extension, in other words, of human faculty. So many of my stories, therefore, deal with extension of consciousness; speculative and imaginative treatment of possibilities outside our normal range of consciousness.... Also, all that happens in our universe is natural; under Law; but an extension of our so limited normal consciousness can reveal new, extra-ordinary powers etc., and the word "supernatural" seems the best word for treating these in fiction. I believe it possible for our consciousness to change and grow, and that with this change we may become aware of a new universe. A "change" in consciousness, in its type, I mean, is something more than a mere extension of what we already possess and know.”

This small collection of short stories published by Penguin Books in 1943 contains six of his pieces that vary quite considerably in length – from genuine short stories to longer tales that are more of a novella. Blackwood’s clear desire to suggest the supernatural rather than to lay it out explicitly runs through all of these examples. Probably my favourite is The Strange Adventure of a Private Secretary which sees a young man playing the role of go-between for two men who once were business partners but are no longer in touch. The private secretary works for the one and is sent on a mission to deliver some papers to the other – but we know that this is a job fraught with potential physical danger, although we don’t know just what. There are very definite echoes of the mission Bram Stoker sends junior estate agent Jonathan Harker on when he visits Castle Dracula but it’s not vampires that are the impending peril here but the suggestion of lycanthropy – werewolves – that haunts this story.  Although Blackwood never spells this out or goes in for explicit and gratuitous violence, the brooding atmosphere is everything.

Lycanthropy seems to be a particular fascination for Blackwood because the final long story in the collection, The Camp of the Dog, also shares that theme – although for me this story was the least tightly written and impactful of the half a dozen that are included in the collection.

I also admired the much shorter Keeping His Promise which involves a ghostly visitation and has some similarities to the style of M.R. James. A young student is awoken in the night by a visit from an old friend he hasn’t seen for many years. The visitor seems in some distress, emaciated and weak and seemingly so fatigued that he can’t speak. The young man feeds his friend, who eats ravenously, but doesn’t speak and then puts him to sleep in his bedroom. His visitor's breathing can be heard rattling through the rooms.

In the morning the young student and another member of his class look into the room where the breathing is coming from and no-one can be found to account for the visit or the sound of breathing. It is then that the young student is told of the death of his old friend whose body was discovered at the same time as he arrived at the student’s house. He had died of starvation.

In Ancient Sorceries, Blackwood demonstrates his interest in ideas of witchcraft and notions of natural magic that attach themselves to specific geographical locations. In this story a rather staid, buttoned-up man makes a spontaneous decision to break his journey home and stop off for a night in a remote French village. It’s a decision that has profound ramifications on the rest of his life.

There are no pyrotechnics in Blackwood’s stories and their art lies in their ability to suggest rather than show and tell – and I think that makes them so much more interesting than more clumsy, run-of-the-mill supernatural or horror writing. Plenty of collections are available and they aren’t expensive in reprint paperback – but if you’re planning on collecting hardcover and first edition copies, expect to dig deep.