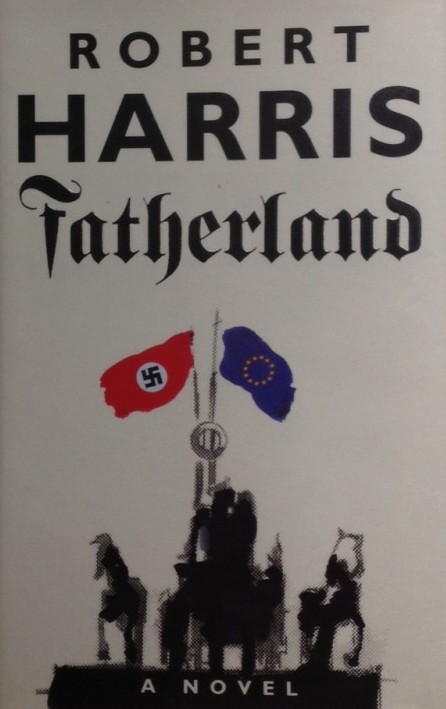 Published in 1992, Robert Harris’ breakthrough first novel has at its heart a quite conventional political thriller/detective novel plot but its extraordinary success is almost certainly the result of mixing this plot with a striking dollop of speculation. In the world Harris creates the date is 1964, Nazi Germany has won the war and the greater German Empire is preparing to celebrate Hitler’s 75th birthday. And although this isn’t the first fiction to imagine this kind of alternative history (Len Deighton had been there himself with SS-GB in 1978), Harris does it with such verve and attention to verisimilitude that he gives the genre a whole new boost of populist rocket fuel.

When the novel opens we are plunged immediately into the world of Xavier March who is an investigator for the Kripo (Kriminalpolizei) who is investigating the suspicious drowning of a man who turns out to be a high-ranking Nazi official. March, is (as detective fiction seems to demand) damaged – he’s self-consciously middle-aged, his personal life is a mess and work has become his life. Despite the inherent corruptions of the totalitarian regime he works in, March finds integrity in being a good and dedicated detective but we discover quite early on that his more ideologically zealous superiors who rise through their machinations and their quasi-political plotting, are compiling a dossier of March’s lack of ideological commitment to the cause. In a disturbing but effective echo of Orwell’s 1984, March’s ex-wife and son are providing the Gestapo with examples of his non-conformity.

So, as readers, we know quite early in the story that March is destined to be destroyed in a system that cannot embrace dissent and the key question that gives the novel pace and momentum is whether he can solve the mystery of the web of political killings before that happens.

As John Mullen writing for The Guardian explains:

“This is alternative history, not allegory. The fraying of power is important to Harris's use of the other genre he exploits: the police procedural. It must be conceivable in this fictional world for a clever and brave investigator – the traditional police detective transposed into a nightmare situation – to find out the terrible truth that has been hidden from Germans as well as from the rest of the world.”

Over the course of the novel March uncovers (with the aid of a German speaking American journalist with who he develops an intimate relationship) a complex plot to prevent the real truth of Hitler’s plans for the final solution to the ‘Jewish problem’  emerging and potentially wrecking the fragile détente between Germany and the world’s only other super-power, America.

I don’t intend revealing any more of the plot because this is, after all, a thriller that is heavily plot driven and you’ll want to discover how this plays out for yourself. What is worth considering is whether the mechanism of the alternative history really works – and for me the answer is a resounding yes.

The secret to the success of the novel isn’t really the detective story or the characterisation but the scrupulous way Harris follows through on the concept of a world dominated by a triumphant Nazi party. The need for any totalitarian regime to inspire doubt and fear, to foster a bogus form of slavish patriotism and to function at a governmental and bureaucratic level through almost total dependence on corruption is quite brilliantly woven into the plot of Fatherland. It makes March’s sacrifices seem both futile and magnificently human.

Harris uses the words of Adolf Hitler as an epigram to start one of the half dozen sections the book is divided into:

"When National Socialism has ruled long enough, it will no longer be possible to conceive of a form of life different from ours."

And it is this that is the dark shadow that seems to sit on top of the whole book – in the back of our minds all the time is the question of whether Xavier March’s dedication to being ‘a good cop’ is enough to make any real difference or will this just be another episode that will be written out of history?

Paperback copies are easily and cheaply available but you’ll find the first edition hardback surprisingly expensive if you fancy getting a collectable edition.