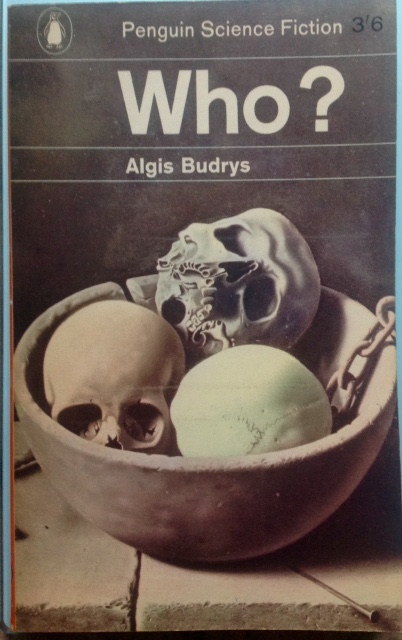 Who? by Algis Budrys

So, given that background, it’s perhaps not surprising that this rather odd book, which was published in the UK in 1964 as a Penguin Science Fiction title, is in fact a fascinating examination of the collective paranoia inflicting governments during the Cold War.

The premise of the book is really rather a simple one. A highly regarded scientist, Dr Lucas Martino, is working for the West on a top secret program that the Soviet side would love to know details of. They get their chance when an explosion at Martino’s laboratory – situated suspiciously close to the West/East border – seriously injures the scientist and the Soviet rescue team is on the spot first and whisk him away.

We join the story when Martino is returned to the West. But he isn’t quite the Martino who left. It seems the explosion was more destructive than had been realised and what the Soviets deliver back is a man who is more metal machine than flesh and blood. In addition to an extraordinary robo-biotic arm fully integrated into bone and muscle, Martino’s whole head has been replaced with a metal construct. He can speak, eat, use his eyes but there’s nothing at all recognisable in terms of features.

This poses the Allies a problem. Is this really Martino or is it a Soviet spy specially adapted to steal secrets? A special squad of people are put to work to try – unsuccessfully as it happens – and work out if Martino is really Martino. Can he be allowed to return to his top secret work is he just too much of a security risk?

It would be wrong, I think, to tell you how this all resolves itself but what I can say is that the reader, by being given a final section that is told from the Soviet perspective, is left in no doubt of the final answer to that question.

In addition to this being a book about Cold War paranoia, the story also asks some searching questions about what it is that makes our identity our own: how a man’s values are formed and how trauma changes or consolidates the way he is viewed and way he views himself. Budrys does this by alternating the contemporary story of the surgically adapted man with alternating chapters that maps the man’s life story and identifying those moments that make him a unique individual.

Martino, in his changed state, also has to discover just who he is now. He cannot, he discovers, rely on the past to remake him – instead he has to create a new Martino who can live with the personality he has become.

This is a slight book in terms of size – a little over 150 pages – but in terms of themes it tries to address, they don’t come much bigger. However, that’s not to say that Budrys is wholly successful in his mission: for me, Martino never really comes alive as a real character and the response of the West to the appearance of this robotically enhanced man seem odd. I can understand their desire to establish whether this is the real Martino or a spy but I can’t understand their seeming insouciance over the fact that the Soviets have the technology to do this kind of surgery.

But maybe I’m quibbling. This is certainly an interesting period piece that will do a pretty good job of giving you a window on what late 1950’s  Cold war mania was really like.