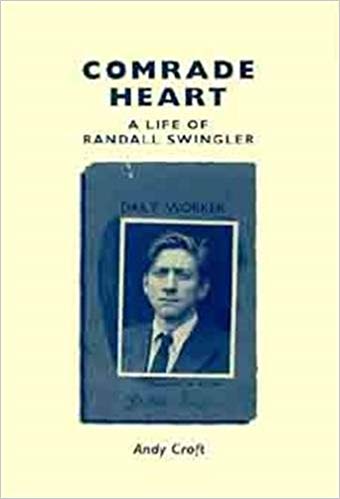 Comrade Heart: A life of Randall Swingler by Andy Croft

Anyone who has an interest in radical Left literature will almost certainly know the name and writings of the critic, poet, broadcaster and novelist, Andy Croft. His seminal work showcasing British novelists and poets from the 1930 and 40s who had Communist sympathies or were members of the CPGB is some of my favourite literary criticism. If you want to explore his range more, I’d point you to Red Letter Days: British Fiction in the 1930s  which is a study of the impact of the Popular Front on 1930s British novelists or A Weapon in the Struggle,  essays on the cultural history of the Communist Party of Great Britain.

But I think it’s also fair to say that Croft has a very particular mission that marks him out from others writing in this field – he’s on the wrong side of obsession when it comes to the writing of the poet, political activist and cultural commentator, Randall Swingler. In fact I’d go as far as saying that Croft’s partiality towards all things Swingler is unparalleled – nobody, but nobody, knows more about this lost star of the radical mid-20th century.

“There are plenty of reasons why fame eluded Randall Swingler, not least his own fierce repudiation of anything that looked like success…Auden and Orwell get to play in the Champions League of course, easily winning a tiny, closed Premiership consisting of MacNeice, Woolf, early Day-Lewis and – rather improbably – Stephen Spender. …But supposing Swingler turns out to be more interesting than ‘minor’ poets are supposed to be?..I hope this book demonstrates that Swingler was anything but a minor poet; that he was, in fact a genuinely heroic figure, whose life and writings deserve an honourable place in the history of his times, and whose poetry was, on occasions, truly great.”

But what about the rest of us? Have we even heard of Randall Swingler, let alone debated whether he’s a minor or major poet? I suspect  most people reading this would have the same answer I had to that question. If that’s the case, Croft’s biography of Swingler, Comrade Heart, the first and only one in print might help fill in the gaps and may even convince you that Croft is right to think that Swingler’s reputation and profile have been unjustly low key.

It’s certainly true that Swingler (1909 – 1967) was right at the heart of the radical political and literary scene in the tumultuous years of the 1930s and 1940s and was, for a time at least, thought to be possibly the brightest star in the firmament. The fact that his light now burns rather more dimly may be down, as Croft contends, to a sort of cultural and political hegemony that privileges chosen writers and actively suppresses others but it may also be about the way in which Swingler seems to have unerringly found a position between two stools – disliked by those who renounced Communism and couldn’t reconcile themselves to Swingler’s willingness to continue toeing the CP line well after some of its more egregious activities were exposed; and mistrusted by Communists who were wary of his tendencies towards independence of mind. Trapped between those two boulders it’s hardly surprising that he’s taken something of a pummelling.

As Croft shows us though, it wasn’t always thus. Coming from a an upper-middle class background, educated at independent schools and moving effortlessly on to Oxford, Swingler was, in many ways, a young man of the golden generation. Popular, good at music, charismatic he seemed to follow the all too familiar trajectory of the rich kids of the day. But in 1931 something happened. It seems no-one, including Croft, quite knows what because without any seeming warning Swingler loses interest in this privileged life, effectively drops out of Oxford with a third class degree and reinvents himself as a social radical. The poetry he’d been writing – fairly unexceptional love verses – switch to a more didactic, polemical, radical versifying and by 1934 he’s a member of the Communist Party.

Croft is excellent and forensic on his entry into this world and the impact he makes – the charisma of his early years is apparent in his new life too and he falls in love, marries, moves out of London and then back again. All the time he’s writing and working hard on behalf of the CPGB.

Unable to go to Spain to fight (the CP didn’t want any more high profile casualties on their hands), Swingler understands that the coming war against Fascism is inevitable. He finds himself nonplussed and disgusted by Moscow’s initial declaration that the war when it came was to be considered an Imperialist escapade Communists should have nothing to do with and he joined up anyway (Moscow changed its tune when Hitler invaded Russia). He fought in North Africa and Italy – at one point being completely buried in rubble which was a trauma that would live with him for the rest of his life.

After the War, Swingler’s reputation was on a downward path. He was blacklisted by the BBC, George Orwell attacked him in Polemic and included him in the list of names he offered the security services in 1949 and Stephen Spender vilified him in The God that Failed. He died suddenly, almost certainly of heart failure at the age of 58 but, in truth, by then he looked much older.

That leaves the final conundrum unanswered. Why given the rehabilitation of so many other ‘lost’ poets, has the name of Randall Swingler remained on the outside? Reviewing Croft’s book online, Alan Morrison postulates the following and I reproduce it here because I have no better answer to the question:

“it seems that Swingler was the victim of Establishment blacklisting, alongside his one-time collaborator, Communist composer Alan Bush. That he was seemingly singled out among his Oxford poet-contemporaries W.H. Auden, Stephen Spender, Cecil Day-Lewis for a more damaging length of time by the State must be to do with a more emphatic and enduring commitment to Communism as opposed to the briefer flirtations of the aforementioned poets. (This might also explain in part the similarly obscured legacies of Communist poets Edgell Rickword (survivor of the First World War, later a friend of Swingler’s), Jack Lindsay, Christopher Caudwell and John Cornford –the latter two fatalities of the Spanish Civil War).”

Andy Croft is never anything less than readable and if the intrigues of Fitzrovia and the Communist Party in Britain during the 30s grab you, this will be a pleasurable addition to your library. Not, though, a cheap one with copies starting at around £40.