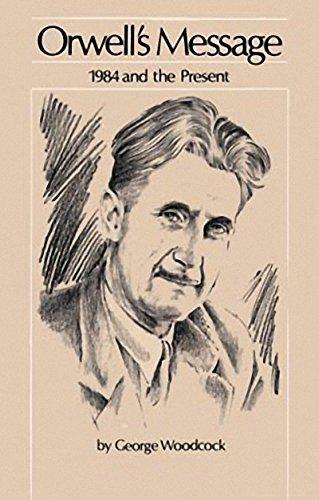 Orwell’s Message : 1984 and the Present by George Woodcock

George Woodcock, who died in 1995 at the age of 82, was a Canadian author, political theorist and literary critic who wrote one of the most accessible introductions to the core ideas of the Anarchist movement that I have personally ever come across. Although  Anarchism: A History of Libertarian Ideas and Movements (1962) sold very well, especially in its Pelican edition, Woodcock is now probably best remembered for his relationship with George Orwell and for his excellent study of that writer’s work he called The Crystal Spirit, which was published in 1966.

Woodcock was a good friend to Orwell in what turned out to be the final ten years of the author’s life but his books are by no means uncritical puff pieces to bolster Orwell’s reputation. In fact, Woodcock and Orwell became friends following a literary and political altercation in the pages of the Partisan Review which was published in the middle of the Second World War. The two men came from very different perspectives when it came to the question of whether anyone taking a pacifist position during the war was, as Orwell suggested, de facto pro- Fascist.  But despite this disagreement the two men built a lasting friendship and Woodcock became the first person to publish critical appreciations of Orwell’s work.

This book, published in 1984 to coincide with the meaningful date of the novel, attempts to contextualise the writing of the book and to dig below the surface to unpick what Orwell’s intensions were in writing it. He also spends a little time towards the end speculating about the significance of 1984 as a text for today (bearing in mind that Woodcock’s ‘today’ is now itself over 30 years ago). It has to be said that this is done in a pretty cursory fashion and is by some distance the least interesting part of the book.

However, the preceding two-thirds of Woodcock’s study is fascinating and in an odd way quite gripping. He is, of course, right to say that Orwell did not write the book as a prophesy  but as a way of playing out what might happen in a world where totalitarian dictatorship is not challenged and defeated. In a very clearly articulated chapter which confronts that now hoary old topic of whether Orwell was a Socialist or a Tory, Woodcock effectively demolishes the claims of the political Right. Orwell’s beef was never with the ideas of Socialism but with those he saw as ‘mock’ Socialists and those who fell prey to blandishments of Totalitarianism  - Communism as it had emerged in the Soviet Union under Stalin and Fascism in all its manifestations were, for Orwell, bed-fellows. Woodcock puts it this way:

“Yet I insist, as Orwell would have insisted, that to the end of his life – whatever the conservative aspects of his thought, he remained a devoted socialist, and I suggest that it is perhaps the unique combination of liberal, conservative, even reactionary elements with his central socialism that made him particularly sensitive to the multiple perils awaiting his and our world..”

The central part of the book – a chapter entitled ‘The Roots of Orwell’s Vision’ – is perhaps the most fascinating. Woodcock emphasises that unlike other dystopian visions (Woodcock prefers to use the term ‘anti-utopian’ rather than dystopian) Orwell reinforces the fact that 1984 isn’t about prophesy but contemporary issues by rooting everything in a slightly warped present. Everything is recognisable and all the references can be traced back to Orwell’s own experiences and, to some extent his own reading. But Woodcock is also clear that the book can’t be understood as having been ‘inspired’ by what Orwell was reading (Zamyatin’s ‘We’ is often cited as a key source) and that any true understanding of 1984 can only be arrived at if we accept that Orwell constructed that world from the one he already knew and had experienced during the war years and those leading up to them.

But the pièce de résistance of Woodcock’s book is his understanding of the central importance of Orwell’s creation of Newspeak. The crucial role of language and the control of what language means is, for me at least, Orwell’s most important set of ideas – I maintain that many modern social philosophers, such as Foucault for example, owe an unacknowledged debt to Orwell for their own ideas about the role of discourse and discourse analysis.

Ultimately I depart from Woodcock on his overall assessment of 1984 as being fundamentally optimistic. He argues that the fact that Winston Smith and Julia could and did revolt against the power of Big Brother and the State means that the door is still open and that the totalitarian desire expressed by the sinister O’Brien to make any such protest impossible had not succeeded. The fact that they ultimately failed and were ‘reprogrammed’ to love Big Brother does not, in Woodcock’s view, represent the loss of hope.

Whilst I can see the merits in that argument I also have to say that I think Orwell’s message was much darker than that. For me, what he is fundamentally challenging is the rather complacent liberal notion that the dictator may be able to take away the physical freedom of the individual but that ultimately humanity and concepts like love cannot be touched if an individual wants to retain them. I think Orwell was telling us that this is nonsense and that the truly terrifying thing about Totalitarian rule is that it’s just that – total. The inside of your head is as accessible to them as your corporeal body and, because of that, there is no space for compromise – there is no way to live with the Totalitarian impulse and expect to retain any shred of what we mean by human decency. And this is why, I think, Orwell was so unbending in his view that all totalitarian regimes must be opposed, by force if necessary.

Woodcock’s book has been out of print for some time now and if you want a copy you will need to try and hunt down a second hand one. Buying on the internet is going to cost you well in excess of £20 so I’d advise you to keep your eyes peeled for this one when you’re browsing the used and charity bookshops.