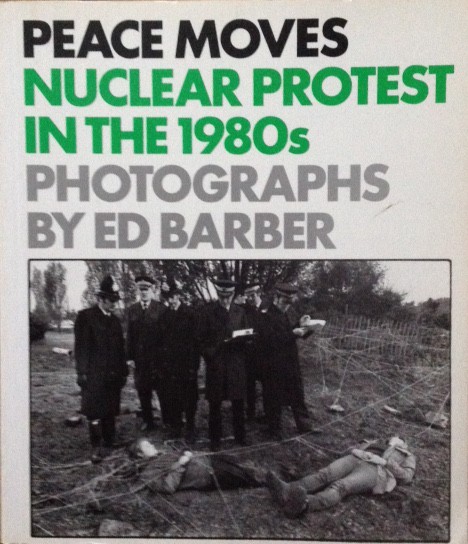 I’ve only just discovered that the photographer, Ed Barber died early last year. At the age of just 67 this is a sad loss – not just to the art of photography but to the Peace Movement that he supported so determinedly. Ed was a leading light of the Half Moon gallery in London and Camerawork, which was the house magazine that was so influential in bringing new talent to the fore.

I first came across Barber’s work when his book, Peace Moves was released in 1984 which documented the people’s protests against the growing nuclear threat that seemed to hang over the world for much of the late 1970s and 1980s. Barber’s straightforward, perceptive black and white documentary photographs exactly captured the mood and actions of those of us who took to the streets.

“Around the same time, the early 1980s, Ed began to make his work about peace protesters, which later was originally published as a book Peace Moves. A selection of these photographs was exhibited at the Imperial War Museum last year in Ed’s solo exhibition Peace Signs: Nuclear Protest in the 1980s, which was meticulously designed by Ed. As well as his photos it included a superb handmade timeline of nuclear protest, a beautiful bench with a peace symbol carved into it and bright yellow walls.

It was a stunning exhibition, bringing out all Ed’s skills as an exhibition designer, and the photographs looked as strong and deeply sympathetic to their subjects as they did three decades ago. The Women’s Peace Camp at Greenham Common can now be seen to have had an enormous influence on mass popular protest, especially on the Occupy movement, and Ed’s work from this period has played a big part in keeping its memory alive.”

To emphasise the role of Barber’s photographs in preserving the memory of the action taken to protest for peace is exactly right I think. As someone who seemed to be on one peace march or another on a pretty regular basis, describing what the experience was actually like – just how urgent the need to protest was – is hard to get across to those who weren’t there. Ed’s photographs fill in the background, provide the context, tell a truth that words alone are not able to sketch.

These years of protest changed many things – the way protest was organised locally, regionally as well as nationally; the way popular music played such an important part in drawing people to the cause; and, possibly most significant of all, the way gender roles were systematically challenged. Women-only protests – the Greenham Common encampment in particular – were an important feature of peace protest and their influence, as Kennard’s contribution suggests, shaped the template for protest that has been used ever since.

I also thought the way the peace movement bridged not just gender but age and social class was also important. I often met with members of the middle class who were taking to the streets for the first time ever and who would never in the past have contemplated being part of a protest movement. The need to demand our continued existence seemed to be a cause worth putting on your Barbour and designer wellies and slumming it with those of us with a distinctly less designer wardrobe and considerably larger set of political demands.

Peace Moves is still a fine collection of photographers and who knows just what contribution to ending the Cold War the resistance it documents made. In addition to the excellent portfolio of images there are two very short essays from Zoe Fairbairns and James Cameron but, in truth, these are really neither here nor there in terms of their contribution to the overall impact. This is all about the photographs which, if you were there, will remind you why you slogged the streets all those Saturday mornings. If you were too young to be there perhaps these photographs will convince you that signing on-line petitions and unliking people on Facebook isn’t the only or most effective way of making your views known.

Only ever published in paperback by Chatto & Windus, this is now quite a hard book to find and if you want to buy one on-line you’ll have to pay over £20 for a copy – but what price can you put on history?