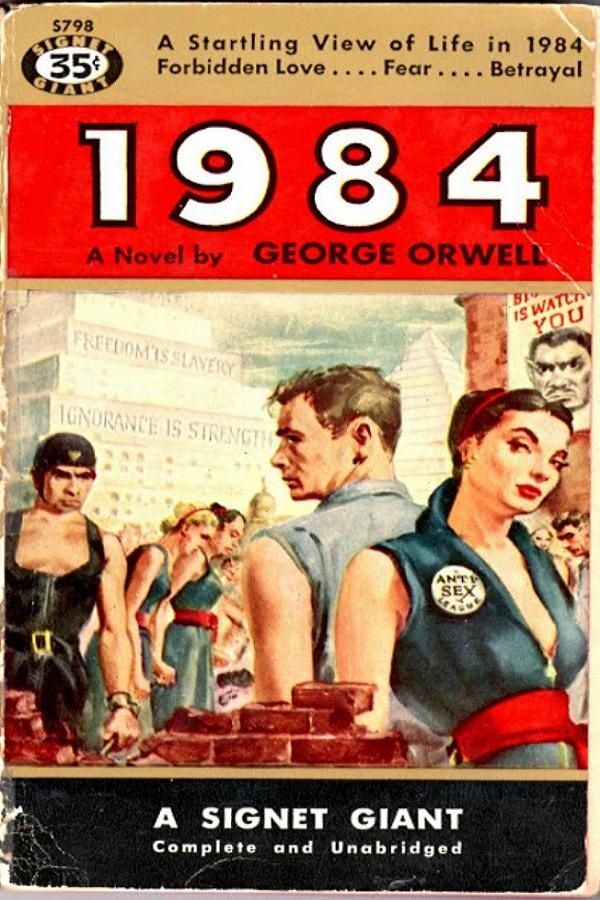 I have to confess to a weakness I seem unable to overcome. There are certain writers whose books I already possess in perfectly serviceable reading copies but who seem to have a magnetic attraction for me – I just can’t help buying multiple copies of the same titles as long as they have different cover designs or formats. I could make up all sorts of highfalutin reasons for this that might excuse this absurd acquisitiveness – maybe something about book design, the art of the book jacket and capturing the essence of the book -  but in reality this kind of rationalisation would only be a half truth. The fact of the matter is that I feel compelled to have these multiple copies as if they were trophies; or, maybe more disturbingly, as if their sheer numbers and presence on my shelves validated my love for that book and said something positive about me as a person.

Fortunately, this obsessive need to capture multiple copies only applies to a handful of books (at the moment) and so the logistics of storage aren’t too difficult to deal with. I’m also a bit of a hardback book snob – I genuinely find paperbacks quite hard to read and I just love the feel of a beautiful clothbound book.

One of the books I can’t resist buying in its various incarnations is George Orwell’s 1984 and although I’ve got very little hope of ever owning a genuine first edition (even I’m loathe to consider spending £2-3,000 for one in decent condition) I get absurd pleasure from hoovering up new or unusual editions. Until now, for the reasons I mentioned above, I’ve resisted branching out into looking for the various paperback versions but I recently stumbled on an article about pulp fiction paperback jackets which might make me change my mind. Recently while browsing book sites looking for new acquisitions I was surprised and delighted to discover that 1984 has been thoroughly ‘pulped’ – issued in cheap paperback with some gloriously lurid jackets designed to sell to those looking for a racy read.

1984 was one of the first books I ever bought when the reading bug first bit me as a teenager and it was in fact a paperback I had then – the famous Penguin Modern Classic of 1969 with a cover which shows The Control Room, Civil Defence Headquarters (1942) by the English painter and war artist William Roberts. I can get absurdly misty-eyed and sentimental about this particular edition and although I kept that copy for decades, I long ago abandoned it in favour of its hardback equivalents. But I must confess that I’m now being hugely tempted to break my self-imposed boundaries and try and get my hands on some of these pulp novel paperbacks that make me smile every time I look at them.

My absolute favourite – how could it not be – is the one illustrated at the top of this article which promises “A startling view of life in 1984. Forbidden love…fear….betrayal.” It was published in the Signet Giant series, complete and unabridged, by the American paperback company that specialised in this redressing of ‘classics’ to try and tempt readers looking for something to read on bus or train journeys. Hence the astonishingly cheap 35 cents price and the truly abominable paper quality and production values. There’s so much to love about the jacket that it’s hard to know where to start but I think everyone will immediately be struck by the odd S&M vibe that the artist, Alan Harmon, has decided on. Writing in The New Yorker magazine, Louis Menand describes the cover this way:

"The cover of the 1950 Signet reprint… features a surprisingly toned Winston Smith, in a sleeveless top that shows off his triceps nicely, sneaking a glance at a slinky Julia, in lipstick and mascara, who wears an Anti-Sex League button pinned to a blouse with a neckline that plunges to her tightly sashed midriff. The artist has rendered O’Brien, Winston’s nemesis, as a sort of sadistic swimming instructor—a menacing dude clad in a black skullcap and halter-top outfit cut daringly across the pecs, and clutching what it is hard not to assume is a whip. "

I can’t help but wonder what a 1950s itinerant salesman or business executive made of the contents when he settled down into his train seat or Greyhound bus and opened the book to find “It was a bright cold day in April, and the clocks were striking thirteen.”

Pulping things up wasn’t just an American ploy to lure in unsuspecting readers and the German (?) Burgers Taschenbucher edition shown in the picture below is also a real gem. A huge pair of bloodshot eyes goggle at a glamorous young woman in diaphanous disarray framed by a midnight blue background. Wonderful.

Who would have guessed that there was so much fun to be had from cheap paperbacks? Actually, I think this whole business of pulped-up classics needs and deserves a bit more investigation – watch this space for more when I’ve had chance to do some digging. 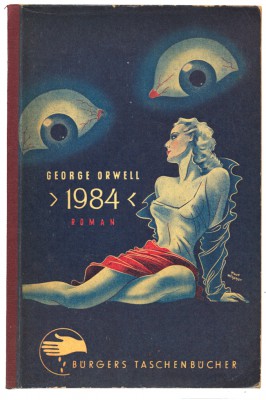 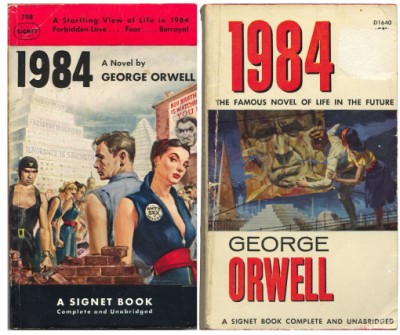 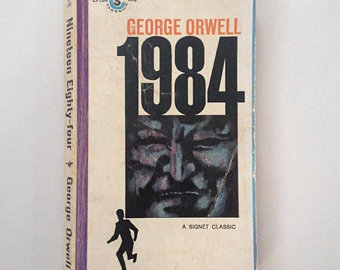 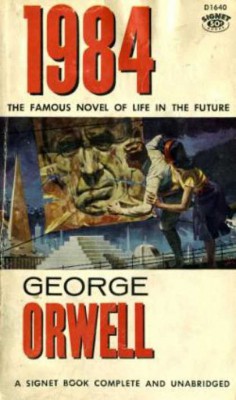 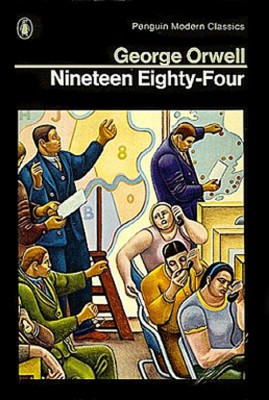