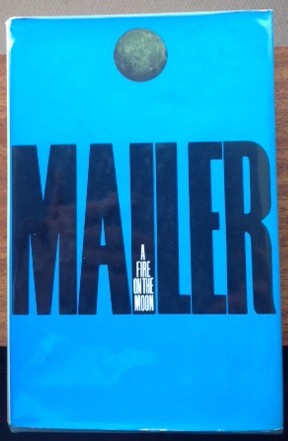 A Fire on the Moon by Norman Mailer (slight return)

A couple of weeks ago we published a really excellent review of Mailer’s A Fire On The Moon by one of our regular guest reviewers, Alun Severn (you’ll find it on this link). In my view it’s a brilliant bit of writing that, in the first third, precisely skewers Mailer and all his weaknesses but which in the remainder of the review tells how this book in particular won him over.

I duly dropped Alun an email expressing my admiration for his article but confessing that, good as it was, it probably wouldn’t get me to read the book. I think my words were something along the lines of ‘I can’t bring myself to read Mailer because he’s such a gigantic prick’. Undeterred by this, however, he urged me to give it a go and, it turns out, I’m a sucker for a reading challenge. So I did.

I think I should say from the outset that it’s unlikely that I’m going to add very much to the original review – it said what needed to be said in ways better than I could probably muster. What I can do is bring you an attempt to explain what the experience of reading this felt like to me.

First and foremost I’d advise you to strap on your metaphorical climbing crampons because you’re going to have to scale the sheer face of Mailer’s titanic ego. The fact that this unique historical moment is re-presented to us almost exclusively through the lens of the Mailer mountain of self-regard is something that is, initially at least, hard to bear. As for his adoption of the assumed third person identity of ‘Aquarius’ – well, really??

I personally always thought that his unwavering belief that he was linked in some umbilical way to Hemingway or the spirit of Hemingway was one of Mailer’s key delusions. He just isn’t that good and the harder he tries the less good it gets in my opinion. The style of writing and the approach to the subject Mailer affects, which often gets labelled as New Journalism, has always felt to me in his hands contrived and clumsy when you compare it to the best practitioners in the genre like Hunter Thompson or Tom Wolfe.

Too often here the sentences are built from the accretion of detail and repetition masquerading as impressionistic word painting – it doesn’t seem to matter if what’s being described is genuinely interesting and important or not, everything gets the same treatment. And the effect of this is to make tracts of the book just very dull. There are way too many pages in this book and far too many of them are redundant.

There’s also that overweening machismo and barely controlled hero worship – the Mailer ‘man’ has to be found in everything the astronauts say and do and it seems that they’re never permitted to say or do anything that isn’t significant or just a tiny bit boring.

Ok: so, now I’ve got that off my chest, I also have to agree with Alun’s original review that there are moments in the book that are transcendent, when it is indeed impossible to resist such prose, or such sparkling, idiosyncratic observations. In my opinion, trapped inside this book is a very good one struggling to get out but being pinned down and stifled by a writer who seems to find it impossible to distinguish between insight and verbiage.

I should also say that despite all my reservations – and I prepared to admit that I may have been more critical than I would normally be simply because I don’t like Mailer or his politics – I did finish the book.