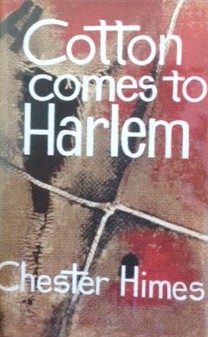 Chester Himes (1909 – 1984) frequently gets tagged with the label the ‘Black Raymond Chandler’ or the ‘Black Dashiell Hammett’ which is a reference to his detective novels which have a hard-edged, noirish feel to them. However, this rather glosses over what an extraordinary phenomenon Himes was. Arrested in 1928 for involvement in an armed robbery, Himes began his writing career in prison and began publishing short stories in magazines early in the 1930s. When he was released on parole in 1936 his literary career was fostered and mentored by Langston Hughes.

By the 1940s he was in California working as a film scriptwriter and producing his first novels. By the end of the decade he decided that a move to Paris to concentrate on his writing would be the next best step for him and in France he joined the likes of James Baldwin and Richard Wright as black writers in a self-imposed exile. He never returned to the USA, moving on to the South of France and living out the final years of his life in Spain.

Cotton Comes To Harlem was published in 1965 and is probably the best known of the detective stories featuring the black cops Gravedigger Jones and Coffin Ed Johnson. It’s the sixth in the series but its high profile almost certainly comes from the quite successful movie adaptation made in 1970 and often thought to be part of the so-called ‘Blaxslpoitation’ genre that was briefly popular at that time.

The book is a brutal and hard-boiled story that relies almost entirely on the reader’s relationship with Gravedigger and Coffin – battle-scarred, unconventional, hard as nails but essentially moral guardians of the black Harlem ‘ordinary’ people. They will have no truck with anyone – black or white – who seeks to exploit the decent people of Harlem and there seem to be no lengths they wont go to in order to make sure decency prevails. The language is course, the plot creaks like an old bed and there are more holes in it than in your average colander. But, like Chandler, none of that really matters – it’s all about the helter-skelter ride and the glorious morbid wise-cracking. If you’re the kind of reader who cares about a plot that makes sense – this probably isn’t for you.

At the heart of this story is a huge chunk of money that’s been stolen from honest unwitting subscribers to a fraudulent scheme. The money has been hidden, rather bizarrely, in a bale of cotton that many people give their lives trying to get hold of. We encounter crooked clergymen, deceitful women, sexual licence, Southern white criminals, brutal killings, a secret hideout in a church crypt and a homeless man that outwits everyone. Holding all this mayhem together are Gravedigger and Coffin who have taken a solemn vow – to return the money to its rightful owners come what may. In pursuit of this they almost lose their jobs and their lives and, although it might not be the original money that they retrieve, they do return the lost subscriptions. The outcome was never really in doubt but you stick with it to find out just how all of this is resolved.

Any fan of the noir genre will probably know about Chester Himes and his work but if you haven’t come across his books before and you are a fan of detective fiction, there’s a treat awaiting you.