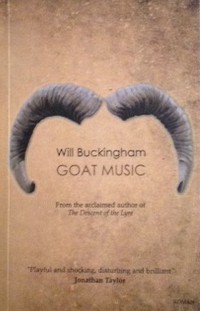 Goat Music by Will Buckingham

The stories and myths of the Classical World remain an enduring source of inspiration to contemporary authors who reinterpret, rewrite and recreate both the stories and moral lessons the originals are so rich in. Will Buckingham, novelist, philosopher and university Reader, has added to this body of work with his take on the tale of Marsyas, the Greek satyr who challenged the God Apollo to a music competition.

One of the attractions of revisiting the original sources lies in the way the stories are so open to interpretation - character, motivation and detail can be invented and reinvented time and again without compromising the integrity of the tale. On top of the written versions, the oral tradition can also add a layer of extra interest or complexity to the stories and these versions provide more material to draw on. In crude terms the original stories of Marsyas tell of how he found the double-flute or aulos made by the goddess Athena which she has cast aside in a rage when the other gods made fun of the face she made when she played the instrument. The satyr goes on to claim his musical prowess is greater than that of the great Apollo and challenges this infamously wrathful God to a competition. Marsyas loses and is flayed alive for his presumption.

These tales are often interpreted as a warning against hubris - how could even the most talented mortal being defeat a god? How could he be so deluded? Other commentators have focussed more on the fact that Marsyas is actually defeated by a rather underhand trick that unfairly benefits Apollo and emphasise the great skill and wisdom of the satyr - qualities unusual in their kind. A line of thinking that Buckingham has seized on in his retelling.

The story Buckingham tells us gives Marsyas and the gods he associates with a much more rounded - even modern - set of characteristics and back stories that make the individuals come alive. He's largely sympathetic to the satyr who, although by no means perfect, is ultimately the flawed hero of the book and a victim of a cold, vengeful, chilling Apollo who punishes the mistakes of mortals with no hint of mercy or proportion. Indeed the tale Buckingham tells us is essentially a humanist one - the gods are largely spiteful, arbitrary, self-centred and generally driven by shabby motives and the only sense of mercy or empathy is found in the mortal but chastened Midas - who has learned the hard way that the gods are not to be trusted.

This is indeed a story of incautious hubris but in Buckingham's hands its also a tale of the arbitrariness of power and exercising that power for the pleasure of the cruelty it can inflict. Power exercised in this fashion robs the victim of their identity and their dignity just as Apollo robs Marsyas of his skin.

I read this story at one sitting and that's a tribute to Buckingham's storytelling powers - this rips along at a fair old pace - and it's full of incident and pretty graphic detail. This is, of course, one of the other advantages of using these stories of the Classical world - they are ram packed with sex and violence and Buckingham embraces these elements with glee.