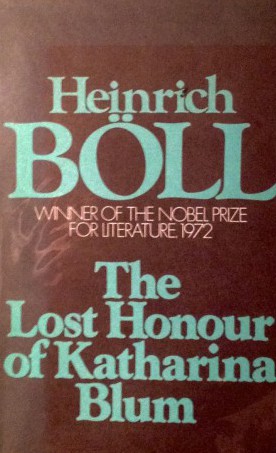 The Lost Honour of Katharina Blum by Heinrich Böll

I wonder how widely read Heinrich Böll is these days? The winner of the 1972 Nobel Prize for Literature died back in 1985 and was considered at that time to be the foremost post-war German writer but I get the impression that today his star has been somewhat eclipsed by the passage of time and changing literary fashions.

Back in the first half of the 1970s when I worked regularly in a bookshop, the novels of Böll were a standard to have on the shelves – both in translation and in the original German as part of a foreign language section. I would be pretty surprised to find anything by him on the equivalent shelves of a modern day bookshop and I think that’s a sad loss.

I very much liked his novel Billiards At Half Past Nine which uses a flashback technique to review the lives of the Faehmal family and in doing so to dissect late 19th and early 20th century German political history. He was also a master of the short form – he built a solid reputation for stories or novellas that encapsulate the modern German psyche. But by some distance my favourite book is The Lost Honour of Katharina Blum published in 1974 and which runs to only a modest 150 pages.

Written in a semi-detached, almost casebook analytical style, Böll tells the story of Katharina Blum, a fastidious, even priggish young woman who has made a success of a modest enterprise providing domestic services to professional clients. She is ultra-careful with money and applies the same discipline to her personal life and her emotions. However, Böll lets us see that there is more to Katharina than just this public persona and hints at a repressed set of emotions that are hidden not too far beneath the surface of her ultra-orderly life. When one day she presents herself at a police station claiming to have committed a murder we are taken into the events that have resulted in this confession.

We discover that prior to this startling confession of murder the police have had another interest in Katharina, believing her to be complicit in helping a radical young,  lawbreaker, Götten, to escape their grasp. She denies her role in this and is aided by one of her employers and long-time friends Mr and Mrs Blorna – who are pillars of society and also Katharina’s solicitor. The story inevitably leaks to the press and it is this that brings into focus Böll’s real target in this novel – the tabloid newspapers.

We see how the newspapers create a mythology about Katharina that is based on lies and half-truths, destroying her reputation – personal and political -  and making any sort of return to ‘ordinary life’ impossible. The papers also destroy the Blornas who are left broken and reliant on a network of old friends to survive.

In his detached and coldly analytical prose Böll profiles the way in which the press can misuse their power – something that prefigures the recent phone-tapping scandals of the British press and the outcome of the Leveson report into press regulation.

In particular the behaviour of one journalist, Tötges, comes under the spotlight and we discover that it is this journalist who Katharina Blum has murdered – shooting him dead.

This novel has a very specific and quite lengthy sub-title – or: how violence develops and where it can lead – and this in many ways helps to capture the spirit of the quasi-documentary style of the book.

I think The Lost Honour of Katharina Blum is a masterclass in economic, insightful prose that puts many, more overblown novels to shame. The book is dense with ideas and they are contained within a story that takes little time to tell but which expands exponentially as the reader unwraps the ambiguities. Truly skilful and genuinely engaging.

The copy I have read and reviewed here is the 1975 UK first edition translated by Leila Vennewitz and published by Secker and Warburg. It is available in a Penguin Vintage Classics paperback which I think is the same translation.