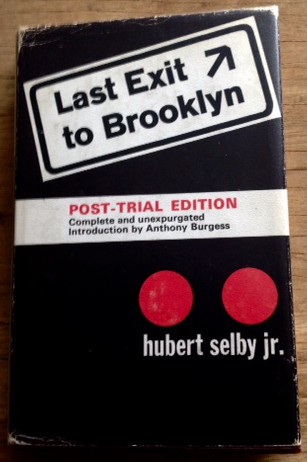 I guess that the old adage, ‘there’s no such thing as bad publicity’, could also apply to books that get banned – especially those that have been deemed by stuffy establishment watchdogs as  likely to corrupt our morals.  In some ways the story of the banning of Hubert Selby Jr.’s  Last Exit To Brooklyn turns out to be, for me at least, more entertaining than the book itself.

Originally published in the UK in 1966 after its successful release in the States, Last Exit was critically pretty well received and had gone to a second print run within three months. It wasn’t until the self-appointed spokespersons of the moral majority – led by Wimbledon MP Cyril Black – decided to bring a private prosecution for obscenity in the Magistrates Court that anyone paid too much notice of the book.  The case pitted the likes of H. Montgomerie Hyde, Robert Maxwell and Basil Blackwell against a defence team that included Anthony Burgess, Edward Lucie-Smith and John Calder.

The labyrinthine legal system eventually resulted in a trial at the Old Bailey in which a parade of luminaries from the cultural and literary establishment turned out for either side. The result of this was a decision that John Calder, the publisher, was guilty of printing and disseminating an obscene publication and duly fined. However, in 1968 the Appeal Court heard an appeal against this finding and, on this occasion the defence of the book was led by John Mortimer Q.C. (now perhaps best known as the author of the Rumpole novels). The Appeal Court judges found that the original decision was unsafe on several points of law and overturned prosecution – paving the way for Last Exit to be reprinted and openly available in the edition you see illustrated at the top of the page, complete with a new introduction written by Anthony Burgess.

So what was all the fuss about? Having read the novel for the first time in order to do this review, it now seems truly astonishing that anyone might have construed the content as ‘obscene’. It is most certainly unpleasant in its portrayal of violence and, particularly, sexual violence; it provides a depressing series of vignettes of poverty and hardship; it might also now be seen as clumsy or politically incorrect in the way it deals with issues of both sexual identity and gender -  but obscene it most certainly isn’t. Critics at the time commentated on the graphic and sometimes luridly frank descriptions of sex in the book but the idea that this can be read for gratuitous titillation seems unlikely unless degradation is your thing – and if it is, I suspect there are plenty of other, more fruitful sources of gratification than a book as densely written as this is.

Although the book is categorised as a novel, it is in reality a handful of almost self-sufficient short stories that are bound together by geography ( Brooklyn and it’s housing  projects) and a cast of individuals who broadly crossover from one story to another. We see the young men who gather at the local café/diner – The Greeks – who spend their time waiting for the thrill of their next act of violence, rounding on the innocent and the not so innocent like a pack of dogs. They occupy the lost spaces of the city, always moving in shadow, making their money illegally and always on the verge of a run-in with the law that will see them in prison.

We are shown a world of frustrated sexuality where drag queens and underage girls turn tricks or try to come to terms with their (illegal) identities and where they are constantly in conflict – with each other, with their families and with the johns they pick up. And, we are also introduced to life in housing projects where people on the margins of society live cheek-by-jowl and no-one has secrets and all judgements are harsh.

For me the most compelling and convincing section of the book is Part V, entitled Strike. This is the story of Harry, a union organiser and local representative who finds himself in the middle of an all-out strike over pay and conditions in the factory he works at. Harry is an unpopular man – mistrusted by his members, hated by his managers and, although a new father, his marriage is in ruins and he can barely stand speaking or touching his wife. He is constantly on the edge of violence and self-hatred.  The union hierarchy love Harry however because he has the capacity to keep the union united and to effectively organise the strike – despite the fact that as the story continues he spends less and less time sober. What becomes clear is that Harry’s rage – in fact Harry’s whole persona – is the result of his repressed homosexuality and when the circumstances of the strike conspire to liberate his desires he finds it impossible to stop the process of metamorphosis .

Selby’s book also attracted commentary on the style of writing he developed – a dense, sometimes lyrical, often brutally dense, phonetic representation of the Brooklyn idiom which is largely stripped of punctuation and where words run together. It’s a style best understood by reading it aloud and with attitude – something that is easier to do these days because we’ve all been conditioned to this by movies like Mean Streets, Taxi Driver or even Saturday Night Fever.  In the end, however, it’s a book without highlight or relief – the remorselessly grim world of these characters where everyone is damaged or a loser and where no-one seems to understand or contemplate kindness is hard to accept as a genuine portrait of a community.  I have no doubt that Selby was trying to do something quite laudable in bringing this world centre stage and in thrusting in front of our eyes a cast of characters that are often purposefully ignored or locked away on the margins. However, he creates a world where there is no sunlight and no space for humour or acts of human decency and  altruism and it has been my experience that it is exactly the existence of these qualities that most effectively illuminates the real nature of inequality and deprivation. The absence of real humanity in the book ends up being its Achilles heel and why, at the end, I was glad to exit the Brooklyn he created.